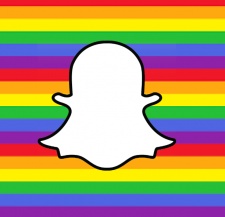 Landmarkers are lenses that transform real-life landmarks using augmented reality, which Snap unveiled back in April.

The Landmarkers can be used in New York City, Washington D.C. and Los Angeles currently, with London and Paris on the way for later in June.

Pride Month is a celebration of the LGBTQ+ community, history, love and diversity while reflecting on the marginalisation still in place.

The three locations available to use with this feature are the Flatiron Building, the Capitol Building and the Chinese Theatre.

“I expanded the concept into the larger narrative of Pride and this interpretation of Pride as a celebration of one’s own identity as well as celebrating the diversity of others” said Joshua Keeney, designer of the Flatiron Building Landmarker.

“The male form is used to express my own queer identity as I've never been able to identify with or see myself in gay culture or feel like I belong.

The ability to create Landmarkers comes from public users. When users submit Snapchats of public stories run by the app, the data is accessible to developers to rebuild the architecture says a representative of Snapchat.