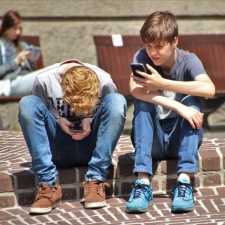 A recent study by Beano Studios shows that 55 per cent of children under 10 are creating regular video content.

The study, which surveyed 2,000 children (or generation alpha) and their parents showed influence of the wider world, with creativity fueled by the growing developments in technology, as well as progressive attitudes towards gender, sexuality and social identity.

66 per cent of respondents said they enjoy creating their own games and worlds, with 98 per cent of the census saying they play outside.

Further to this, 400 of those surveyed (20 per cent) stated they are already making money from their hobby or talent, despite being under the age of 10 years old.

Beano also highlights that 58 per cent of the children surveyed think gender doesn’t matter, a contrast to the 68 per cent of parents who disagree.

As a result, Beano labels generation alpha as “post-stereotype” with a developed acceptance and understanding of individuals beyond their gender.

Consequently, the Beano report shows an engaged upcoming generation with a drive to create and question the societal norms - 20 per cent of kids aged between 5 and 9 have been on a march or have attended a protest about something they care about.

Beano chief executive Emma Scott said: “Gen Alpha is the generation that will seek to bend the digital world to their needs and ambitions and not be defined or consumed by it; they will set aside our current worldview stereotypes of identity and difference, and their love for cherishing and saving the physical world around them will literally change the face of our planet.

“We’ve only just started to scratch the surface of this exciting, impassioned generation. With the oldest of Gen Alpha yet to reach secondary school, Beano for Brands will continue to monitor their progress and educate the world on who they are and what we as parents, educators, legislators and businesses need to do to keep up with them.”

Brands are paying more for influencer marketing, but social stars are earning less