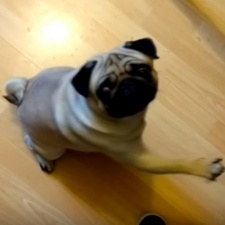 Mark Meechan, known by his YouTube channel Count Dankula or his other title 'Nazi pug man' is the star of a new BBC Three documentary.

Directed by BAFTA-nominated filmmaker Dan Murdoch, the 39-minute documentary follows Meechan as he explores edgy comedy, and just how much comedians can get away with.

The documentary supposedly “challenges Mark’s views and holds him to account,” according to a BBC spokesperson.

In April 2018, Meechan was charged for teaching his pug dog to perform Nazi salutes over Anti-Semitic statements under the Count Dankula channel.

Earlier this year, Meechan's appearance on BBC show The Collective was canceled following a slew of complaints to the network.

Following an appearance in court, Meechan sparked a conversation to the severity of comedy, with comedian Ricky Gervais being among those to defend the YouTuber’s jokes.

Meechan described his video in the show as a freedom of speech and referred to it as “edgy humour.”

While Meechan has claimed that he is not associated with far right politics, as reflected by teaching his pug Anti-Semetic statements to hail to, Meechan has been seen engaging with outspoken politician Nigel Farage, as well as raising £186,000 in legal costs from the public to support Tommy Robinson, both of whom are seen to promote far-right political viewpoints. Meechan is also a member of UKIP.

The 31-year old was charged £800 for his Nazi pug video, after being found in breach of the Communications Act 2003 which was deemed “grossly offensive”.

As of May 2019, The Guardian reports that Meechan stated that the verdict was an infringement of his freedom of speech, and is yet to pay the fine.