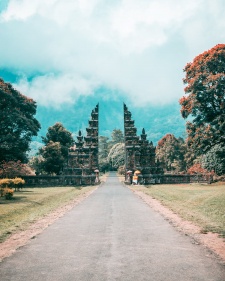 In a video which has since been deleted, Slouka splashes Dolezalova with water onto her bottom initially intended as a joke. The video was shared on Instagram by Balinese politician Arya Wedakarna, where it garnered hundreds of comments from upset locals.

However as the water turned out to be Holy water from a local temple, the pair received criticism regarding their behaviour, with locals using it as an argument against tourists visiting the temple due to cultural ignorance.

According to a representative of the local police department, Nyoman Nuryana, the influencer couple personally apologised to the locals of Padangtegal village, who own the temple.

The pair will also have to join in with a religious ceremony on August 15th to seek penance.

Following the backlash, the pair have since made their accounts private, as well as releasing an apology video onto Instagram, where the pair have a combined following of 70,000.