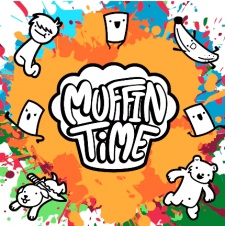 The game is based on a suicidal cartoon muffin from their popular online web series asdfmovie.

Partnering with party game publisher, Big Potato Games, Muffin Time was announced via the crowdfunding website Kickstarter aiming to raise £10,000 ($12,000). The initial £10k was raised in just 20 minutes. As of writing, the project has raised over £300,000.

Announcing the campaign via a YouTube video, the Turbo Punch team stated that the game is “kind of like a sexy horse. Except it's a bit shorter; it's perfectly square; and it's a card game,” with the goal of the game to be the first to hold ten cards in your hand.

The game is suitable for players aged 12 upwards and can be played by two to ten players at once.

Explaining how the project happened, Bowley said, “we’ve spent the past year developing this game. It’s got 200 unique cards, all inspired by the asdfmovie series and we’re so excited to get this game out there and to work with Big Potato to publish it!"

The crowdfunding will conclude September 13th, with stretch goals enabling donors to push the total raised amount, creating greater perks for the benefactors.