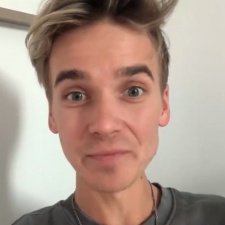 YouTuber and former Strictly Come Dancing finalist Joe Sugg has been confirmed to make his West End debut in Waitress.

Playing Ogie in the show, Sugg is to replace The Inbetweeners’ star Blake Harrison on September 9th.

When asked about his role, Sugg said, “I got to see the show a couple of months back and it's absolutely fantastic. I'm excited to be a part of the cast and to have now landed a role in the West End really has topped off an incredible year for me."

“I hope I do everyone proud and thanks to all my supporters for making it all possible and the best year yet."
The show is playing at the Adelphi Theatre, and is directed by Diane Paulus, with music by Sara Bareilles, based on the 2007 film of the same name.

This is the third time an online creator has been confirmed to star in Waitress, with Colleen Ballinger, and Todrick Hall starring in Waitress on Broadway. Ballinger’s debut in Waitress follows her characterised singing character, Miranda Sings, which became a Netflix series titled Haters Back Off.

Ballinger and Hall will star in Waitress on Broadway from August 20th to September 15th.

The musical is about a waitress who’s stuck in a toxic relationship, and launched on the West End in March 2019, set to run until January 2020.