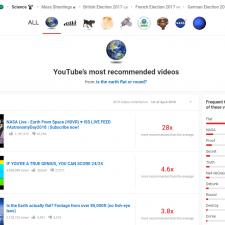 In a bid to bring more transparency to YouTube's algorithm, ex-Google employee Guillaume Chaslot has build a service that'll show visitors which videos are recommended the most.

The site is called AlgoTransparency, and it'll show you where YouTube's suggestion algorithm takes you depending on what you're searching for.

Chaslot worked at YouTube in 2011 and moved on to Google in 2013. He claims that he was let go from the company because he wanted users to have more control over the content recommended to them.

It's easy to fall in to the auto-recommendation trap; YouTube will lead you through a ton of videos, and sometimes in to a dark place you probably didn't need to go.

Chaslot began tracking recommendations in 2016, when he found that some phrases such as 'global warming' will end up leading users towards conspiracy theory or anti-science content.

“Everybody should know, if you start to spend time on YouTube, where it’s going to take you,” Chaslot says.

Mozilla accuses Google of slowing down YouTube on Firefox