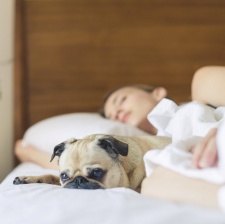 “How does that feel?” asks the salesperson, showering you in the science of pocket springs as you stare at the store ceiling from a plastic-wrapped bed.

This is how we’re used to buying mattresses. The full, completely awkward, slightly confusing, bricks-and-mortar experience.

Neil Parikh is co-founder and chief operating officer of online mattress startup Casper, who described the in-store mattress-buying experience as “worse than buying a used car”.

To create a better experience for mattress-buyers, Casper disrupted the $39 billion global industry with an affordable, high-quality foam mattress that could be rolled up and shipped easily in 2014. Today, Casper is a billion-dollar company itself.

Before the launch, however, Neil and the four other Casper founders were met with plenty of “nopes” from investors, who didn’t believe selling mattresses online could ever work. The five of them racked up $100,000 on credit cards before a group of venture capital investors saved the day and they scored $1.85 million in seed funding.

A huge factor in Casper’s success has been rethinking how we buy mattresses. A convenient shopping experience combined with, in Casper’s words, “outrageous comfort”. But how do you convey outrageous comfort - the feeling of a tangible product, particularly an investment most customers hope to last eight years or longer - without them being able to experience it themselves?

Sweet dreams are made of influencers

When Kylie Jenner posted photos of her new Casper mattress on Instagram in March 2015, it reached more than 870,000 likes. The brand website was inundated with her followers - they’d made sleep cool.

Collaborations of this kind have played a monumental role in harnessing Casper as the millennial mattress, doing wonders for its brand image and visibility.

Casper quickly tapped into the Youtube, Instagram and other influencer hangouts - including the blogosphere (it’s not dead, okay?). The company formed a fleet of cheerleaders, including blogger Jack Mitcham, aka The Mattress Nerd, and mattress review site Sleepopolis, who they paid generously and shipped free products to review.

The collaboration with Sleepopolis took a turn for the worst when Casper declined to renew affiliate relationships with the review site, among others, when it received a $55 million investment and entered a period of re-evaluation.

As a result, Sleepopolis was more vocal about Casper’s competitors. Casper filed a lawsuit against the review site, claiming that it had driven customers to competitors without proper disclosure that other brands paid commission for sales.

Casper’s next move was an eye-raiser. Amid this “sleep war”, Sleepopolis was bizarrely acquired by another mattress review site, JAKK Media, in 2017. And where did the generous loan to acquire the site come from? Casper. Still, despite the negative PR and strange acquisition having a knock-on effect on Casper’s friendly, innocent reputation, the startup still managed to reach profitability in 2019.

Competitors may be a big threat to Casper’s success, but the company isn’t complacent. Other mattress companies to have taken the Casper model and ran into the night with it are Leesa Sleep - a similar start-up offering stress-free, quality mattresses in boxes. Leesa has raised more than $30 million from investors.

As a result, Casper has expanded its products. It now sells sheets, lamps, pillows and dog mattresses. For the latter, Casper tapped into the petfluencer market, sharing photos of furry social stars to promote its dog mattresses on Instagram.

Casper is resilient - you’ve got to give it that. With the power of influencers, it gradually paid off its debt and finally reached profitability after such lofty startup costs. But the brand’s transparency has been questionable.

Its cut-off of affiliate relationships disrespected influencers and the takeover of what was thought of as an independent review site has made buyers question its authenticity.

We can learn from Casper - it’s undeniable that the mattress brand is a serious disrupter of the sleep world and its use of influencers has been radical, to say the least. But we must also learn from its mistakes.

Wanna avoid those common mistakes brands tend to slip up on when working with influencers? Read this next.