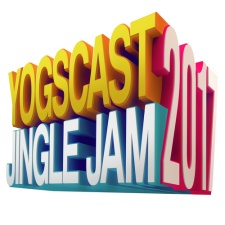 The Yogs host daily streams on their Twitch channel, with the intention of raising money for charity. The tradition began back in 2011, and has since become a staple of the company's activities. They also release a curated Humble Bundle collection every year that fans can purchase.

"The Jingle Jam started when Lewis and Simon started getting Christmas gifts from the community, and in-turn asked them to donate to charity instead." Yogscast CEO Mark Turpin said. "Six years and over $6m later and it's become the cornerstone of the year for the creators and the community."

"The set-up is that the various members of the Yogscast family stream on our hub Twitch channel for 12 hours or more every day in December and people donate mainly by buying the Jingle Jam Humble Bundle, where there are more than $700 worth of PC games for $35. We reveal new games every day."

"The streams can feature anything from playing games to watching cat videos, a karaoke night, board games, a cooking stream and plenty of guest stars popping in. A full schedule can be found here."

And people will also be able to choose their own charity when the buy the Bundle.

The Jingle Jam has grown expotentially as the company has expanded. The company commented on how it's now largely led by the ever-growing Yogscast community - fans can't wait to start watching and donating.

"The community has really taken it up - to the point where we have thousands of people watching the daytime 'office cam' as they wait for the action to start." - Turps said.

"We've also had amazing support from games developers and publishers who provide the games for the Bundle free of charge."