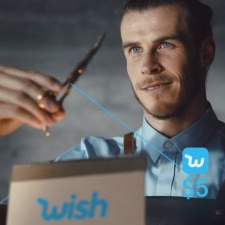 For anyone yet to hear of this mega-hyped brand, Wish is currently the UK’s number one online shopping app.

Buy a jumper for a fiver, a smartwatch for £7… even bag yourself some items for free. It’s a discount-shopper’s dream.

Wish works by connecting shoppers directly to manufacturers, cutting out the middleman to keep prices low. YouTube is rammed with Wish hauls and ‘Wish lists’ from bloggers, proving the shopping giant has the perfect formula for today’s disposable consumer.

But it was their big advertising campaign last year that had marketers putting the brand on their wish-I’d-thought-of-that list.

Flogging everything from electronics to novelty Nirvana cat tees, the brand wanted to show how far-flung their stock was. If you’re bored or have a little time on your hands, it’s fun to browse over 200 million products on the store - shopping for pleasure and purpose.

To drive sales and raise awareness of the app’s features, Wish worked with major football stars whose countries didn’t make the 2018 World Cup. The purpose was to show footballers in their home environments, discovering new hobbies during their time off (with a little help from the app). Using high-profile players with mammoth followings (Gareth Bale has 17.8m on Twitter alone), Wish could directly reach and influence millions.

Archers Mark worked with Wish to create eight #TimeOnYourHands videos. The content needed to be playful to reflect the brand voice, which has a strong dose of humour, while showing the app and its features in use.

It also needed to promote the platform’s bargain prices. Each YouTube video had the branded hashtag as well as a call-to-action to download the app in the description. Gareth Bale orders a pair of clippers and becomes an expert (albeit eccentric) barber, Claudio Bravo becomes a drone pilot, using the machine to drop ice cubes into his cocktails, while Tim Howard turns his backyard into a dream party place (using Wish products) and becomes a badass DJ.

The adverts were shown internationally during the World Cup and aired by ITV in the UK during all the England games. Each player also shared the videos on their own social networks.

Within two hours, Brazil player Neymar Junior generated two million views alone on Instagram, in two hours. The footballers executed the campaign requests spectacularly, creating light-hearted videos that appealed to their fans, were perfectly topical during the World Cup and showed just how nifty and cheap Wish was for a huge range of customer needs.

Each product unveiled in the adverts was highlight with a price, showing the ridiculously low-cost products in use.

Wish is the perfect shopping platform for the disposable consumer. Airing the ads during the World Cup reached a global audience and the risk of offending countries of the teams that didn’t qualify paid off.

The campaign stood out a mile with relevance, humour and showing footballers as normal human beings, at home, messing about on their smartphones.

There’s no doubt this campaign resulted in more and more consumers downloading the Wish app and making purchases, not to mention the powerful brand recognition to a global audience of avid football fans.