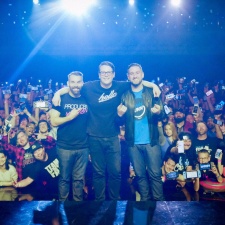 Podcasting is now a career. Hundreds of professionals make a living from simply speaking about their lives or specialist subject. Now while some people feel that talking into a microphone is straightforward and requires no training or preparation, those that have spent years perfecting the skill will tell you its an art.

By the year 2022 it’s expected that 132 million people will listen to podcasts in the US alone (via Statista). If we go off the estimated 329 million residents, that’s more than 40 per cent of the country tuning in to voices from around the globe.

Some with no prior experience, some with little, some that are now considered veterans and have now based their whole financial model around it. One of these is a trio of former IGN employees that set out to create their own online entertainment company.

California-based Kinda Funny was established on January 5th, 2015 by Greg Miller, Colin Moriarty, Tim Gettys and Nick Scarpino. Two channels were created on YouTube – Kinda Funny and Kinda Funny Games – alongside a Patreon to help them achieve their goals.

Now five years on, the group has gone from recording out of their dusty spare room to a dedicated apartment for filming, over 4,000 supporters across both Patreons, 240,000 plus subscribers for each YouTube channel, hosting their own E3 games showcase, and a passionate fanbase that goes by name of the “Best Friends”.

Still, the former ‘IGN’ers’ have witnessed turbulent times – most namely the altercation and subsequent exit of co-founder Moriarty, that has seen both parties’ distance themselves from one another publicly for the most part.

Two years on from the spat, Kinda Funny has a total of eight employees (including three part-timers), a partnership with Rooster Teeth and a brand-new structure that delivered a new slate of shows into commission.

InfluencerUpdate.biz caught up with Miller, Gettys and Scarpino at their London meet-up to discuss life as an influencer, mental health, their community and how 2019 has treated the trio so far.

“2019 has been the best year of Kinda Funny by a long shot,” declares Gettys.

“We relaunched with Kinda Funny 4.0 which is our brand-new slate of programming that took all the best aspects of what we did in the past while letting the worse aspects fall by the wayside. We really focused on what our strengths our on the entertainment, nerd culture, comedy side of things."

“This has been the most fun I’ve had so far and mostly because of how Tim was saying, we’ve really taken a look at what we want to be doing and just done that.”

Miller adds: “This is the first time we’ve got to the end of the year and we don’t want to blow everything up.”

“We made our bets in January on what would work, and it did all work which was super huge for us. On top of the ‘World Tour’ bringing us the UK, we’ve found such serenity in having the schedule broken up the way we have, where there is a rhyme and reason to every day.”

In previous years, Kinda Funny has hosted large live shows in San Francisco with a dedicated ‘meet-and-greet’ afterwards, which has seen fans fly in from around the world just to grab a moment with their favourite content makers.

“We might go back to that one day,” Scarpino says.

“But we looked at this year and we were like what’s a better way to do this? What do people really want us to do? They just want to engage, talk and hang with us. It’s so fun because it’s taken away the anxiety of having to produce this big show. We can literally just cut the fat, go, hang out, drink and meet people. That’s what it’s all about.”

Being a full-time content creator in this day and age can be incredibly taxing, and mental health concerns within the profession are being spotlighted more than ever before.

A lot of people that enjoy success - especially in their early 20s - just don’t know how to deal with it.

“I think we have a leg up because we all came from IGN where we learned so much about structure, business and how teams need to work together,” adds Gettys.

“I feel that many other content creators don’t have the luxury of that experience so they go in and have to learn everything.”

“A lot of people that enjoy success - especially in their early 20s - just don’t know how to deal with it. After working in a corporate structure for so long, you did learn there are good and bad ways to do things.

“You also learn to really lean on the people around you. When my brain starts going off in crazy directions, I rely on these two guys to pull me back or push me over the edge, depending on which way they want me to go.”

“Plus, IGN forced us to eat so much s**t in the comments you can’t hurt us now,” jokes Miller.

This weekend, Kinda Funny celebrated its fifth anniversary, which can be something of a lifetime for influencers dealing with the constant cycle of create, edit, publish, repeat. It’s also long enough to have had to deal with some grueling and important lessons.

I was thinking I was going to take naps in the middle of the afternoon, then cut to a week and a half in and I’m crying because I couldn’t set up the retro games emulator

“I’ve talked about that since I did my first interview after launching Kinda Funny. We launched this idea it was going to be Colin and Greg in the morning, a video game stream in the afternoon, we would do a podcast etcetera.”

“A Nintendo podcast, a PlayStation podcast and so on,” Gettys interjects.

“I was thinking I was going to take naps in the middle of the afternoon, then cut to a week and a half in and I’m crying because I couldn’t’ set up the retro games emulator,” recalls Miller.

“We learned we have to do less. It didn’t dawn on me at Kinda Funny until we set up the structure this year where I’m on three shows and this is a bad idea. We can rely on other people.”

“To me, the most important thing has been learning to be comfortable in my own skin,” Scarpino says.

“We have an amazing crew of people that come to work every day with great attitudes and want to make great stuff. If we can carry that into half a million subscribers, great. If that never happens and this is as great as it gets, I consider myself pretty happy and pretty successful.”

Gettys adds: “For me, it’s totally team-based. My core rule is to invest in people the way people invested in me and constantly try to give back.”

Though everything seems to be swinging in favour of the podcasters, a look into the group’s growth (via Social Blade) shows that Kinda Funny only grew by 10,000 subscribers over the last 12 months, while Kinda Funny Games only increased by 4,000.

While numbers are not everything, 2019 showed the least growth year-on-year since both channels were established. Given Kinda Funny's consistent schedule and successful events, what is causing the stunt in growth?

“It’s an excellent question that will absolutely be addressed in 2020,” explains Gettys.

“We focused 4.0 on the Kinda Funny side of things. We really doubled down on that content. “We didn’t have these giant megaton experiences [in games] that we’re going to get next year.”

“The kind of content we do is more tailored towards engagement than growth,” adds Scarpino.

“We’re podcasters at our hearts. That’s going to attract a certain group of hardcore people that we love and there about 300 of them here but it’s not necessarily the most viral, shareable content you have out there.”

I want our team to be nowhere bigger than double the size it is now but full of people that are equally talented and passionate.

"It’s something I don’t fully understand that we are not growing everywhere," Gettys concludes.

"Why aren’t we getting that growth on YouTube? But I do think I have a lot of answers to those questions and I think by the time we implement those things we’ll see some changes.”

While subscribers and viewers failed to rise substantially in 2019, fan attendance for Kinda Funny ‘meet and greets’ have. So much, in fact, that their events now need to be limited to a set amount of tickets. All tickets were free but were claimed on a first-come, first-served basis.

“The magic of our community is that it’s not all about us,” smiles Miller.

“You think it's about us but when you get into a room with a bunch of other people and similar interests, friendships legitimately form. So many people met last year at RTX London and now they’ve been friends for a year.”

Scarpino adds: “I guarantee there’s someone who wasn’t sure if they should show up but pushed themselves out of their comfort zones and now, they’re going to make a ton of friends. That for me is the coolest thing."

When announced, Kinda Funny was one of the first major names in video games to utilise the Patreon platform, leading the way for many others in the industry. After a successful and sustainable five years as content creators, where do they see themselves in another half-decade?

“That’s all I can think about. I just want to be doing similar content on a grander scale with these guys.”

“Have the best of the best,” Miller agrees.

“Keep bringing people in to make cool s**t that we haven’t got the ability to make now.”

“A proper studio that’s not an apartment, and I want our team to be nowhere bigger than double the size it is now but full of people that are equally talented and passionate.”

Earlier this year we spoke to former Kinda Funny co-host Andrea Rene about being more than the “girl gamer podcast” at What’s Good Games.