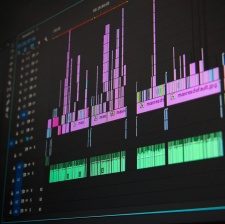 One of the main rules of film editing is that it’s meant to be invisible. If you spot a cut, a reverse shot, a blocking change, that usually means the editor has failed somewhat.

However, when it comes to high-energy YouTube gaming videos, something is very wrong if you miss it. Rapid zooms, funny sound effects and frame-perfect meme edits bombard viewers and keep our wavering attention span laser-focused.

While the influencer behind the camera becomes the centre of attention, there is something slipping through the cracks. The editing of our favourite videos may be obvious, the editors themselves are becoming invisible.

Video editing is a very taxing job. From making Happy Wheels videos in Windows Movie Maker at 13-years-old to complex timelines in Adobe Premiere Pro, I know what it’s like to spend hours trimming and re-arranging the same clips until it’s light outside. Editing gaming content involves watching through hours and hours of clips, stripping it for parts, arranging a timeline and then making sure every second is dynamic, interesting, or funny.

From Roblox to Rainbow Six: Siege, edits need to make every second count, and that takes a lot of working hours. Many influencers wish to skip that part, so video editors step in to take on the job. And those jobs can be gruelling according to the souls behind the screens.

“The most stressful part of the job for me is hitting deadlines,” said Toby ‘SoTotallyToby’ Cottrell, a freelance video editor who was previously a part of the Yogscast network. He’s worked on a range of video content from Minecraft, Pokémon GO and Fortnite, as well as vlogs.

“I get the footage anywhere from 8am - 3pm and have to make sure the video is edited to a decent quality, rendered, uploaded and ready to be published at between 6pm - 8pm. I've often had to skip lunch and breaks to make sure I hit the upload deadline.”

“Sometimes you don't know what time you'll be receiving a video to edit for that day (or at all) which makes planning a social life extremely hard,” says Cottrell.

“I've often been invited out by friends but had to cancel numerous times because of editing commitments.”

But is the cash worth the stress? While freelancers are often paid a flat rate per video which can range from nothing to hundreds, the consistency of the work can be lacking.

“I massively depend on a creator uploading regularly to be able to pay my bills,” said Cottrell, who is paid a flat rate per video.

The simulation of authenticity is harming the freelancers doing the work behind the scenes.

“If they decide to take a break or run out of ideas or motivation to make videos for me to edit then it can be a bit scary. For some clients, I've gone from editing one video a day to suddenly only editing five videos a month with no warning.”

Inconsistency of work and the fear of losing it altogether isn’t news to any freelancer, but a solo influencer may not generate the reliable flow of content that most media companies have locked down.

YouTube creators are in full control of when to upload, what to upload and if to even upload at all. And without a standard industry rate, pay can fluctuate to “less than 1% of that video’s revenue”, according to Cottrell’s experience across various jobs.

The freedom that influencers have to control their content expands beyond upload rates, as it affects how audiences view influencers as creative lone wolves. The authenticity of a real person filming, editing and uploading to a public forum humanises popular creators and separates them from the traditional media celebrities on an elevated pedestal. But the simulation of authenticity and simplicity is harming the freelancers doing the work behind the scenes.

“Off the top of my head, I don't think I've ever been credited for my work on a video,” Cottrell adds.

“It, of course, depends on the creator but in my experience, they don't like their audiences knowing they have an editor that does the work for them.

“I think they're worried their audience may respond negatively to finding out their favourite creator has a team of people behind the scenes doing work for them to make them look good.

“They want to come across as an individual creating content because they enjoy doing it; not a company producing content to generate as much revenue as possible.”

As Cottrell mentions, this treatment does depend on the creators. Lots of creators place a lot of trust in an editor to create their trademark content and will make sure it does not go unnoticed.

Adam “Speedy” Pelka, a Roblox video editor now working with six million subscriber heavy-hitter Flamingo, also weighed in on the importance of credit and including editors in the creative process.

“Over my editing career I've only had one person try to claim my work as their own and I never worked for them again,” says Pelka.

“No one should be doing that, give credit where it's due!”

The standard, respectable practice is to credit editors either in a YouTube end card or in the video’s description. This way, the work is acknowledged and the editor can be exposed to more opportunities and audiences can follow their personal work. Editors can often be publicly mentioned in casual video conversation as the creator makes requests in jest, which can normalise their involvement in the process without making the video seem ‘faked’.

Although Pelka has had positive experiences, he still believes video editors are under-appreciated in YouTube spaces.

“Editing can make or break the video, even if the recorded content is super good or super bad,” explains Pelka.

“Many people don't realise this or don't really pay attention to it - personally I think editing makes up for at least 50% of the video, if not more.”

Cottrell agrees with regards to under-appreciation, saying that: “if you do your job right, people won't be sure you've done anything at all, but if you do a rubbish edit, the comment section will be absolutely sure to let you know.”

So while experiences can range, the YouTube industry has a lot of work to do to stop hiding video editors from the public eye. Many content creators credit their workers freely with little backlash, while some still don’t credit their editors at all. The dismissal is smothering to a freelancer trying to pay the bills.

Gradually, the performative act of YouTube is being chipped away with this behaviour towards workers like video editors. Artists should always be credited, and the hidden layer of YouTube content can’t stay hidden forever. Editing can be invisible, but the editors aren’t going anywhere.