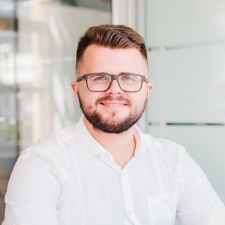 Azur Games is a global developer and publisher of mobile games with a portfolio counting more than 15 projects.

The most popular among them are World War Heroes, Modern Strike Online, Pocket Troops and Space Armada.

The game takes place in the distant future, where humankind faces its technological decline followed by interplanetary space wars.

At the end of March, the app was officially pre-released. The game was announced for Google Play (now also available in the App Store) and users could only pre-register and had no other options.

This means that players needed to press the register button to confirm their interest in the new game. When it went live, they received a special notification and could instantly download it.

With this approach, some marketing campaigns often offer perks for the players. When the app is released, users get a starter bonus for installation, which motivates them to play more.

To complement our traditional marketing efforts, we decided to experiment and give it a go with influencers.

A full release was scheduled for April 18th when the app was made available for downloading.

“There were a bunch of reasons why we decided to use this marketing tool for the pre-registration stage, including a professional interest. We wanted to try influencer marketing to see how it performs and whether it can work for us.

"Currently, there is no viable user acquisition method available for the pre-registration stage. This is why, to complement our traditional marketing efforts, we decided to experiment and give it a go with influencers. It turned out to be a great decision.”

Influencers are generally perceived as an image-building channel. Marketing strategies however inevitably adapt to new technologies and user habits trying to use all traffic sources and make the most of them.

And influencer marketing is becoming an important part of the omnichannel approach as it addresses the crucial challenges: reach and engagement.

Azur Games has an in-house marketing team that deals with all traditional sources (e.g. Facebook). They developed and launched a traditional marketing campaign, but didn’t have experience of working with influencers on a pre-registration campaign.

As the launch was scheduled only two weeks before the release, Azur Games turned to Zorka.Mobi to take on this challenge.

The campaign had following prerequisites:

“Based on the previous experience in game promotion, we decided to choose YouTube out of all other influencer marketing channels," says Zorka.Mobi business development manager Iryna Kavalchuk.

"Initially, our campaign was focused on the English-speaking users, but we eventually decided to make a shift to Latin America. The reason behind this decision is that the app was announced for Android only and the majority of this platform’s users are located exactly in this region.”

Having analysed our database with over 300k bloggers from 90 countries, we pre-selected 30 relevant influencers. The selection continued and we picked 13 influencers to be included in the media plan, as they were most suitable for driving pre-registrations from the target audience.

During our campaign, one of the influencers quit. So, to achieve the forecasted results, we quickly looked for a substitute. We managed to find not just one, but several influencers, and added them to the campaign as they were a perfect match for our task.

The screenshot of our media plan with audience data of the selected influencers can be found below (as of March 28th 2018).

We used our in-house influencer marketing platform for making forecasts. It can predict the minimum and maximum number of clicks, conversions and other performance indicators.

After the media plan had been approved, the campaign started: negotiations with bloggers, approval of creatives, production and release of videos.

Influencer campaigns are often believed to be hard to predict and measure. However, tracking links and high-quality post-analytics make it possible.

During 22 days, the campaign resulted in 1.3 million pre-registrations both from Facebook promotion by Azur Games and influencer campaign by Zorka.Mobi (see graph 1).

Our case with Azur Games demonstrated that the experiment was worth it. This campaign also proved the effectiveness of influencer marketing in acquiring users during pre-registration.

If you decide to follow this model in promoting your products, keep in mind that you have to provide video content because bloggers will not be able to make the gameplay footage.

In this experiment, we decided not to use the iOS platform, which helped to attract the desired target audience. Thus, for proper targeting by region, you need to clearly understand your product and take into account the platform for its promotion.

For example, if your app has only an Android version, select bloggers with the audience from Latin America. If it is only available on iOS, then pick influencers from the USA. This will allow you to minimise the loss of traffic.