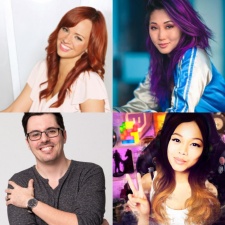 This week, VentureBeat hosted the GamesBeat Summit 2020, a digital conference featuring a host of talks, panels and networking opportunities for folk working in the games industry.

As part of the summit, Andrea Rene of What's Good Games' hosted a roundtable discussion titled 'the future of influencer marketing. She was joined by Mari Takahashi of Smosh Games, Joshua Ovenshire of Arcade Cloud, and Facebook streamer Jonna Mae, known as MissesMae online.

Rene kicked off the discussion by asking what the word 'influencer' meant to everyone.

"It was a name that kinda stuck to make YouTubers feel different to celebrities," Ovenshire said.

"Influencer is such a vague word. Nobody wants to be influenced. If anything, we're more akin to TV or radio personalities, rather than influencers."

Takahashi added: "I can understand the aversion to the word influencer but I think there's a difference between people who have been doing it for years, and someone who just came on the scene because it's profitable right now."

Rene highlighted that the video games space, in particular, can be hypercritical of creators, especially when it comes to brand deals and promoting products.

"When I'm live on stream, I can't imagine the effort that goes into putting on a character. Even just being me is exhausting at times," Mae said, in response to connecting with her community.

"I also prefer to test things that companies have given me before I dish it out to my community. If you get caught not knowing something, you get destroyed live on air."

Being genuine is the hardest thing to fake.

Ovenshire added: "being genuine is the hardest thing to fake. Our audiences are gonna be the first ones to catch onto that"

"The moment they feel like we're lying, it shakes up the entire relationship, just like any other relationship."

Takahashi also said: "I've taken brand deals that felt wrong, but it took a lot of years to realise what was wrong about it,"

"There's a lot of knowledge in making mistakes and recovering, and also celebrating the wins and what worked. You always get feedback in this industry of when you're rocking it and when you're messing it up."

The panel went on to discuss what makes a brand deal successful or enticing, and how creators balance paid content alongside the stuff they want to do for fun.

Mae highlighted one promotional campaign ran by Xbox, where she received seasonal items the company had sent out to promote Forza. The items included a beach blanket, a tea set, a box of sand, and an Xbox branded leaf blower.

"We get so much from companies, so sending out odd branded items that you wouldn't usually see is a talking point, and it gets people discussing the game too," Mae added.

To round off the discussion, Rene asked the group where influencer marketing in gaming could be heading next. One particular trend highlighted was companies recruiting groups of streamers in order to promote a title, using Borderlands 3 as an example of this.

"If you bring the right people and personalities in yeah that can work," Mae said.

"But I feel like there could be a good balance between paid streamers and organic ones."

Takahashi added: "Brands are really interested in communities, and the key to accessing them is influencers and they way they speak to their audiences,"

"Video games are hot right now and it's only gonna get hotter!"