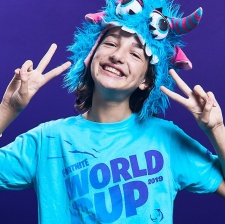 Streamer Ewok has picked up the gong for Streamer of the Year at the 2019 Golden Joystick awards.

The annual show, hosted by GamesRadar, celebrates the best games released throughout the year. The show took place at London's Bloomsbury Big Top.

Ewok shot to fame back in March this year after her channel was hosted by TimTheTatman. Tim's fans instantly took to the 13-year-old, deaf Twitch streamer's bright personality and her channel exploded, growing from 900 to over 88,000 followers in less than a month. She's also played Fortnite alongside Ninja and Dr Lupo.

During the show, Apex Legends picked up the award for Best Multiplayer Game, Minecraft snagged the Still Playing Award, and Outer Wilds walked away with Indie Game of the Year.

The full list of nominees for Streamer of the Year is as follows.

In 2015, the show's Gaming Personality of the Year award was taken home by YouTuber Felix 'PewDiePie' Kjellberg. The decision was met with controversy as Kjellberg's ludicruous number of subscribers gave him a significant advantage over other nominees during the show's voting process.

In 2017, Mark 'Markiplier' Fischbach picked up the award for Best Streamer, while in 2018, the coveted golden stick was taken by Bryan Dechart and Amelia Rose Blaire. The award replaced 2016's YouTube Personality of the Year, which was won by Jesse Cox.