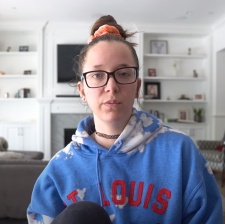 Long-time YouTube creator Jenna Mourey, known as Jenna Marbles online, has announced that she will be stepping back from the platform.

Mourey has been making content since 2010, and is regarded as a pioneer among YouTube's first wave of big content creators, before the platform expanded into the billion-dollar business it is now.

In a new video, Mourey addressed a number of videos she had made with racist and misogynistic undertones, including a blackface impersonation of Nicki Minaj featured in a 2011 video.

"I'm not completely unproblematic," Mourey said in the video.

"I've tried my best to grow up and to be a better person.

"I just want to tell you that it was not my intention to do blackface. It doesn't matter, all that matters is that people were offended. It's shameful, it's awful. I wish it wasn't part of my past."

Mourey has made those videos private meaning fans can no longer view them. She did not confirm whether she would be returning to YouTube or not, but the majority of her content is still public on her JennaMarbles channel.

"I think I'm just going to move on from this channel for now," Mourey added.

"I don't know if that's forever, I don't know how long it's gonna be, I just want to make sure the things I put into the world aren't hurting anyone."