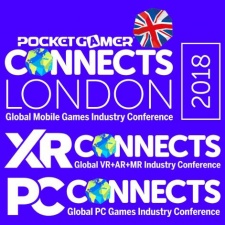 There's so much to do and see at PG Connects London 2018.

It's next week, Monday 22 January and Tuesday 23 January, near the Barbican in central London. And it's massive, with 300 speakers across three events (mobile, PC and VR/AR), pitches, panels, speedmatching, networking, a legendary party and more. And this year the event includes a track about influencer marketing in games. Where do you begin planning your time at something like that?

Let our professional journalists guide you. We asked our network's editors and writers to pick their highlights from next week's schedule.

There's so much great stuff going on at PG Connects London next week that I don't really know where to start. We've got 300 speakers over 20 tracks – I'll just let that sink in, it's crazy, watch out GDC! – plus a rammed expo area, three separate pitches and a cracking party. And don't forget the first ever Mobile Games Awards!

Superstar Fireside Chat: Working With Influencers
3:00 pm - 3:20 pm Tuesday 23rd January, Influencer Insight
If pressed at gunpoint I'd have to say the things I'm most excited about are my fireside chats. On day two, as part of our influencer track, I'll be chatting with the awesome Marika Appel about Supercell's unique approach to working with community and influencers. Both should be essential viewing!

Panel: The Influencer’s Perspective
3:40 pm - 4:20 pm Tuesday 23rd January, Influencer Insight
There's a lot of buzz about the seemingly magical powers of influencer marketing. But what do the actual influencers think about that? Dunno, so let’s go to this panel together and find out.

The Journalist bar
No, it’s not actually a bar. But there will be journalists there (possibly wishing it WAS a bar), and I’m going to be one of them. Really looking forward to seeing all the new games that people are going to thrust into my eager hands.

The XR Indie Pitch
1:30 pm – 4:00 pm Tuesday 23rd January, XR Connects
A developer pitching session is always the highlight of a show for me. I love speaking to the teams behind the projects that you just don’t get to see anywhere else and hearing their stories. And I also love the rigorous debate that ensues between the judges in the aftermath…

The Global Connects Party
From 7:30 pm, Amber Bar
PG Connects really is the daddy of all the shows… but where to start? A raft of great speakers or another fascinating indie pitch? Nah, I’ll have to go with the Global Connects party on Monday night. There just isn’t enough time to talk to everyone at the show itself, so this is a great way to find out more about the crazy projects everyone’s working on at length over a jar or two.

Digital Discovery track
2 pm – 5:40pm Monday 22nd January, PC Connects
Want tips for getting the word out about your game? Digital Discovery, with its mix of publishers, developers and media professionals has you covered.

The PC Indie Pitch
10:30 am – 1 pm Monday 22nd January, PC Connects
If that wasn't enough, the PC Indie Pitch on Monday will let developers pitch to a panel of industry judges for a chance to win some prizes (and, of course, glory).

Mobile Games Awards
7 pm – 11 pm, BAFTA 195 Piccadilly (separate ticket required)
Out of all the great things going on at Pocket Gamer Connects London (including exciting talks from Supercell, SYBO Games, Ustwo and Snap!), I'm particularly looking forward to the first ever Mobile Games Awards taking place at the prestigious BAFTA 195 Piccadilly. Considering it's the biggest sector in the games industry, the teams in mobile don't get the recognition they deserve for all their hard work and creativity - and it's time that changed. That's why we've put together a ceremony where we're expecting around 230 attendees to celebrate what makes this industry so great: the people. Want to go? There are limited tickets remaining, so be quick!

The Influencer's Perspective
3:40 pm – 4:30 pm Tuesday 23rd January, Influencer Insight
The influencer space is such an exciting emerging space, yet even its biggest stars often go under the radar of the mass public consciousness. So the upcoming panel on The Influencer's Perspective (January 23rd, 3:40pm) should offer great insight into the minds of these star individuals and how they operate between creating engaging videos, handling fame and working with marketers. The panel includes Space Ape's Jodi Sahlin and influencers Turps, Azzyland, Kwebbelkop and Josh Pieters.

Influencer Insight track
3 pm – 5:20 pm Tuesday 23rd January, PG Connects
It goes without saying that PG Connects can teach you everything you need to know about building and marketing a game. But who's going to help you sell it? PG Connects' Influencer Insight track is packed with leaders in the influencer space - from marketers and managers to the influencers themselves. Brimming with insight and success stories, these folk are here and raring to share their knowledge. Come and meet the strategy behind The Yogscast - the UK's biggest network of gaming creators. Or Kwebbelkop and Azzyland, two YouTubers with 10 million subscribers between them. The Influencer's Perspective takes you behind the thoughts of the creators themselves, what they want from a campaign, and what businesses can do to gain their interest. If you're about to go big on influencer marketing, it's worth finding out how to get their attention.

eSports Academy track
11:20 am – 3:00 pm Tuesday 23rd January, PG Connects
I think the rise of mobile esports is a particularly tantalising topic this year as we head into PGC 2018. Everyone is now carrying a 5-inch device with the capabilities of a computer in their pockets, making mobile esports a completely viable and profitable venture. I'm excited to hear from the folks taking part in our Esports Academy track, including James Dean of ESL, Taewon Yun of Super Evil Megacorp, the company behind Vainglory.

VR & eSports – The Perfect Match
10:40 am – 11:00 am Monday 22nd January, XR Connects
We also have some interesting panels featuring the likes of Patrick O’Luanaigh from nDreams, on how VR and eSports is a perfect combination. That is basically currently unheard of and so it'll be a great insight to a potentially powerful incoming trend.

It's still possible to get tickets although time is running out! Book NOW at Eventbrite. Remember, the same ticket gets you into PG Connects (mobile), PC Connects and XR Connects (VR+AR+MR)! You will need a separate ticket for the Mobile Game Awards at BAFTA, though. See you on Monday and Tuesday...

Dave is Steel Media's Chief Operations Officer. He gets involved in all areas of the business, from front page editorial to behind-the-scenes planning. He began his career in games and entertainment journalism back in the 1990s when Doom came on four floppy disks. Please contact him with any general queries about Pocket Gamer, Blockchain Gamer and Steel Media's other sites and events.