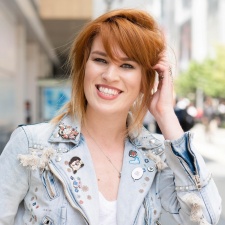 Hollie Bennett is a creator, presenter and manager for YouTube channel Playstation Access. After deciding that midwifery was not her calling, Bennett moved in to the games space working in various PR and social roles before moving to work for Playstation Access full time.

She also picked up the accolade of ‘Influencer of the Year’ at this year’s MCV Women in Games awards.

Bennett’s passionate and enthusiasm for all things games is both infectious and unrivalled, and her expertise isn’t far behind. We had a chat with the PS fanatic about the history of the channel, the drawbacks that come from being Playstation centric, and the way that creators have begun to change the games media landscape for the better.

Influencerupdate.biz: First off, talk us through what you do! What do you do, how long have you been doing it?
Hollie Bennett: I work as channel manager for a YouTube channel called Playstation Access. It's actually an official channel for Playstation UK. It was started about seven years ago and I joined six years ago, originally as Playstation's community and social media manager.

We put a lot of work in with Playstation 4 and started capitalising on the personalities that we had on the channel, the channel grew really quick and ended up becoming a shining beacon of what we can do with personality, humour and Playstation.

Last year they actually said 'you know what you're right, the channel's got really big, it really needs you on it full time.' So I actually left Playstation and went freelance just to look after the YouTube channel full time. So I'm now the channel manager as a result!

Who is your target audience and how do you think that affects your work?
Well I mean the majority of our audience are Playstation 4 owners, but on a wider scale I think we appeal to anyone who just wants to talk about and celebrate games. We get a lot of comments like 'I don't have a Playstation but this really makes me want one and I feel bad that I don't have one' and we're like, no, we just want you to share the excitement about video games.

With our content we try and find a balance, We're still going to cover the big triple A games because we still need views, we still have a channel to grow, but finding and sharing these indie gems is the best part of the job.

Have you ever felt restricted being a Playstation only channel?
It's a bit of a weird one because as a gamer I play everything and I always have done. I think it's important as a member of Playstation Access that I do play everything.

But honestly this generation on Playstation 4 between the Japanese games (which are like, my soul) the big triple A's and the explosion of indies is the best thing. It's very rare that we look and something and wish we could cover it, because if we love it enough and we're clever enough, we'll find a way to cover it.

Just going to dial it back a few weeks to when you won 'influencer of the year' at MCV's Women in Games awards. What do you think it means to be an influencer?
I'm very lucky to be surrounded by incredibly intelligent women and I always look straight to people like the fantastic Keza McDonald. Personally I do struggle to sometimes put in to words how I feel about certain topics and women in games is one of those topics.

I've always been scared to have an opinion on some things in case I can't articulate how I properly feel. So instead I work hard and do great stuff and allow that to shine out. For me as an influencer that's the core of what I do. I just want to be passionate and put that in to the work I produce and I hope that is what people see!

How do you think the games media industry is changing with the rise of influencers?

We have to acknowledge that things have changed. I used to work in PR originally; before I came to Playstation I was actually an executive PR for a different games publisher and the job I do now didn't really exist back then. I didn't have a separate list for people that only did YouTube or Twitch. Twitch wasn't even really a thing!

The rise of gaming influencers has changed the landscape and the way we work. It's also changed the way PR works too. We require different things to the traditional games press. Content creators game code that we can capture to make content. That was never a worry back then because nobody made videos.

I'd like to think that there's now room for everything to co-exist. I still love reading and picking up magazines, or going online and looking at the think pieces. But at the same time I also love watching Awesome Games Done Quick. It's like television to me. I don't want TV (apart from Bake Off obviously) so this is my entertainment now.

It's turned up very quickly but I do think it'll keep evolving.

How do you think the YouTube/Influencer is scene is performing currently? How do you think you’d fare if you started a new channel right now?
It is difficult to start anything. I think we started at a good time, it was just before the launch of the PS4 that we switched to being a YouTube channel full time. It is tough to start now because you could argue that the market is relatively saturated, there are plenty of young and talented people that are experimenting with the platforms and some of them will get picked up - sometimes we know why and sometimes we don't!

To anyone that wants to get in to it - there are so many skills that come with doing YouTube that are transferable to your CV and future career path. When people tell me that they want to start a YouTube channel, I tell them I think they should do it because just doing it will teach them a lot of things.

Even if just 100 people watch that video, you've still proven that you can edit, that you can run a channel, that you can present, it's given people a look at your humour and your personality. There's more to it than just becoming a big YouTuber, I think the skills you learn can really help your career in general.

Do you have any advice for dealing with burnout? What do you do when you need to make content but don't feel like playing games?
It's okay to take a step back. I think people expect me to be an expert on all games and I always point out that I'm not an expert on games, I'm passionate about games. But like anyone I can burn out. When that happens I just take a step away, either by reading a book or just re-playing an old favourite game in order to visit somewhere comfortable.

There's more to it than just becoming a big YouTuber, I think the skills you learn can really help your career in general.

I see old character or hear a piece of music and suddenly all the feelings of why I love video games come rushing back. I also enjoy diving in to the digital Playstation store and digging through the indie section.

What advice would you give to people starting a channel?
If you're looking to start a channel, first of all just take a step back and think about why. If you're starting a channel because you want to work in games, just back it up a little and have a look at what this industry can fully offer you. I don't think people realise how wonderful and deep and creative this industry can be. Just make sure you're not blanking out other fantastic paths.

If you definitely want to create content, have a think about that. Do you want to do YouTube or Twitch? Because they're two very different platforms. And even though they are different, they both require time, dedication and a routine.

If you want to be a livestreamer, just hit share and have a go at it to see if you like it. It's a good thing to do before you start spending money because the reality is that both of these hobbies are expensive.

You have to get used to hearing yourself, so you can watch and edit your own content, as well as reflect on what you've made. You absolutely have to be confident, because it's going to take a long time, and it can hurt. When you put so much love in to creating a video and it's got 100 views it can be really hurtful because you're not sure why people can't see what you can see.

It can be hard to keep going when its like that but I want people to know that this is just the foundation. It'll be like this for a while, but you can still take great lessons away from it and potentially use the skills you've learned to find a different career.