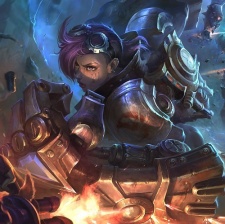 Riot Games’ League of Legends has topped the viewership for most watched hours on Twitch during the first six months of 2019.

As reported by The Esports Observer, the popular MOBA has seen viewers tune in for over 512 million hours’ worth, showing an increase of 435.2 million hours year-on-year.

The title is on track to surpass one billion hours by the end of 2019 if it continues at the same pace. Fortnite is currently the only game to achieve those numbers, breaking the record in 2018.

Epic Games’ battle royale has seen a decline in watchers over the first two quarters, dropping from 531 million hours in 2018 to 465 million in 2019. Though these numbers were enough for the global phenomenon to claim second place on the platform.

Following this was Grand Theft Auto V from Rockstar Games, which saw its viewership increase the most, going from 58.8 million to 269.1 million hours year-on-year.

Interestingly, PUBG failed to make the top 10 list altogether after previously grabbing fifth position for the entirety of 2018, with over 376.4 million hours accumulated.

If you'd like to follow the most watched games and channels on Twitch every week, check out InfluencerUpdate.biz's weekly charts in collaboration with Stream Hatchet.