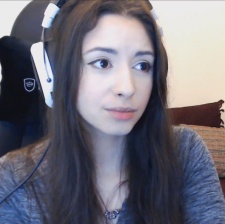 A popular Twitch streamer is being criticised online following a 'racist' outburst during a live stream.

Sweet Anita suffers from Tourette's Syndrome, a neurological disorder that causes involuntary movements and speech. The tics are sporadic and uncontrollable, and can often contain offensive words or phrases.

She ended her stream shortly after, but clips of the outbursts have been saved and shared to social media, including Reddit. Twitter user lilchipmunk shared the video stating: "I don't care if she has Tourette's, she should have a way to mute herself,". The tweet has since been removed, but can be seen on Dexerto.

Anita is open about her ailment online and has worked to raise awareness of the condition via her content. She's amassed a Twitch community of over 500,000 followers, the majority of whom are accepting of her random tics as she embraces them. Anita was also shortlisted as 'Streamer of the Year' at the 2019 Golden Joystick Awards.

Since the outburst, Anita has responded to the critcism both in video and on Twitter, re-affirming that while she may uncontrollably say some words, they do not reflect her personal beliefs. This also isn't the first time Anita has had to defend her Tourette's - the streamer was accused of faking the condition earlier this year.

“I read the comments section. There were a lot of people who were really angry or thought I should be banned," Anita said in a Twitch video.

"A lot of people think the N-word is in your vocabulary so you must be racist.

“The N-word is on everyone’s vocabulary. We all know what it is and that it’s a word, and so does my Tourette’s. That doesn’t mean it’s something I believe or feel about anyone.”

Anita also took to Twitter to thank Redditors for defending her and explaining Tourette's to those who seemed to not understand the condition.

"I'm trying my best in this situation but honestly it's likely to happen again," Anita added.

"The more people pressure me not to say it, the more my condition latches on to the phrase. It never used to be a tic before twitch, but chat has been intentionally triggering it."

HUGE thanks everyone who has been patiently explaining tourette's syndrome to folks who have been confused or outraged by my n word controversy on twitter/reddit. The more people who understand the safer life becomes with people with tourette's. https://t.co/so1ngJlI2d