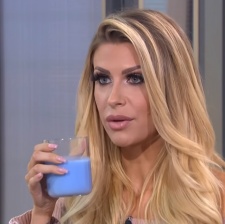 For those unfamiliar, Sophie Hinchliffe, aka Mrs Hinch, is a cleaning influencer who posts videos of herself removing every last speck of dust from her spotless Essex home.

Her commitment to the colour grey is admirable and there’s something completely mesmerising about watching her disinfect her bathroom to Whitney Houston.

Here are a few quick facts to get you swotted up before we start:

“The Hinch Effect”: a simple tonic for a nervous nation

In a world that doesn’t seem to stop, the calming powers of cleaning helped Sophie Hinchcliffe’s mental health - ticking off to-dos and basking in the rewarding serenity of an uncluttered, fresh-smelling space.

She told HELLO!: "If I'm feeling anxious I use it [cleaning] as a coping mechanism to steady my thoughts. Tidy house, tidy mind."

She’s Essex’s very own Marie Kondo - the Japanese tidying-up guru who inspired millions to organise their T-shirt drawers and chuck out anything that didn’t “spark joy”.

In a time when the news is rammed with bad news and divided nations - and even Attenborough’s treacle-tones can’t soothe us from the sight of walruses tumbling to their death on Our Planet - cleaning our own corners gives us control. It gives us problems with tangible solutions.

Rise of the Hinch Army

For Ellie Wray, content marketing manager at Rise at Seven, her appeal is in her relatability, inclusivity and entertainment factor:

“Her regular stories bring light into a lot of people’s lives,” she told Influencer Update. “I’m obsessed with how she’s made a mundane topic interesting through her quirky hip-hop-filled tutorials and her mop named Dave.”

Despite research from The Grocer showing 60 per cent of people who’ve heard from her have bought something purely on her recommendation, she still gets flak from the press about buying her followers. This spurred Wray to do some research for herself.

“I used HypeAuditor to compare Mrs Hinch’s account to a number of other influencers in different niches and hers was the most genuine - she hasn’t bought a single follower, people just love her!”

Interestingly, Mrs Hinch doesn’t seem to have a specific demographic. Wray adds: “my 26-year-old sister loves her, but so does my mate’s mum Julie the hairdresser!”

Which brands has Mrs Hinch helped?

Staff at Zoflora’s factory in Huddersfield had to double production and work overtime to keep shop shelves stocked. Her Vileda spray mop (which she affectionately names Vera) has sent the company’s sales soaring by 98 per cent. Meanwhile, Cif Stainless Steel has grown by two-thirds since joining the Hinch “family”, according to Unilever.

But to see her most powerful work as an influencer, look to the lesser-known brands. Mister Loft Ladder Ltd had 49 followers before Mrs Hinch gave them a genuine story shoutout. Not a sponsored ad, just a hearty recommendation following a great service...

…they now have nearly 40K followers. The sheer influence of this influencer is extraordinary. Not everyone can replicate her success, but we sure can learn from it.

Mrs Hinch’s success boils down to trust. Her followers respect her authenticity - proven by her organic follower count and high engagement rate on social media.

1. You be you. It’s a hackneyed phrase for a reason - it’s true. Mrs Hinch constantly lets her personality shine through. She’s unapologetically herself and is very likeable for it. She openly discusses her anxiety and body issues (including her gastric band complications) and it’s this vulnerability that builds a stronger connection with followers. She’s playful and entertaining - or ‘hinching mad!’ as she calls it.

2. Show up every day. The more you post, the more likes and followers you get. Simple as that. Mrs Hinch posts Instagram Stories daily, sharing her routine and cleaning tips.

3. Name your fans. Sophie lovingly names her crowd ‘Hinchers’ or ‘Hinch Army’. This might seem trivial, but fan base names make followers feel more like a community. Everyone knows what a Belieber and the BeyHive is - these names glue to our minds and strengthen brand image.

4. Talking of brand image, nail it down - then stick to it. Try to keep your themes apparent from one glance at your profile. Mrs Hinch’s grey colour palette is her ‘thing’ visually. When it comes to her content themes, she sticks to cleaning, family life and mental health. No matter how many people are selling the same products or ideas, no one can present them like you can.

5. Create branded hashtags. We all know by now that we should probably avoid #susanalbumparty, but playing around with brand slogans and campaigns can really help solidify your brand identity. Mrs Hinch uses #mrshinch, #imahincher and #homehinchhome which her fans also use in their own posts.

6. Harness the power of relationships. There’s nothing more powerful for a business than an old-fashioned recommendation from someone you trust. According to Nielsen and Roper Reports, 92% of shoppers say word-of-mouth recommendations are the “leading reason they buy a product or service.” But you won’t get them without forming authentic relationships with your followers. Engage with your community: ask for testimonials, inform, entertain, educate and start conversations. Compelling experiences and personal interaction will get influencers and fans to invest in your message and pass it on. Or, to follow in the footsteps of Mister Loft Ladder Ltd - just give a bloody good service.

If there’s one thing today’s savvy social users can smell a mile off, it’s a fake - and Hinchy’s honest-to-goodness influence is the real deal.