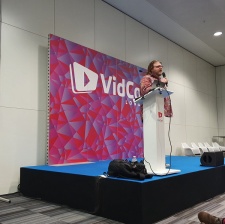 As part of VidCon London 2020, Ogilvy head of digital Robert Davis took to the stage with 'Small Screens, Big Decisions', a talk about how to plan and get the most out of video content across different platforms.

In this talk, Davis focused on the importance of planning content depending on where it would be seen, such as mobile or TV, before going into how the human brain responds to different imagery.

He also goes on to discuss how video content should be planned and made differently depending on whether people will be watching it on a mobile device or on a TV. However, planning an idea and making it work for both can often kill creativity.

"It's not good for anybody if you go into an idea thinking about how many versions you have to make of it," Davis says.

"All marketers see when you mention multiple projects is more spend, and it totally kills the creative process."

Videos for mobile devices should be tailored to a shorter attention span because users are generally more distracted when they're watching something on a small device.

"People use the excuse of a human attention span to make short content or excuse people tuning out of their videos," Davis says.

"It's usually nothing to do with attention span. It's because the content sucks. Attention is earned, not given."

Davis digs into the best ways to gain a viewer's attention on a small screen when they're more likely to be distracted, such as images that are easily recognisable. He also states that human brains love faces.

"If we're trying to reach a distracted user, the image is something that their brain will recognise without them needing to pay too much attention," he says.

There's also an element of vigilance required when designing video content. For example, text needs to be made so it can be read easily across different sized screens. It also needs to take into account visual impairments.

Davis discussed a recent Ogilvy campaign made with Corteva Agriscience, an American agriculture company. Ogilvy was tasked with promoting the launch of the company and created a series of videos that targeted their default audience.

Ogilvy created a ten-minute documentary on what's interesting to farmers in Indiana. That video was designed to be enjoyed on a large screen. However, Ogilvy also made 10 more shorter videos with fresh content filmed especially for their format, and not just snippets from the first video.

Davis noted that the campaign was successful because the videos were a perfect length and design for a mobile audience. He also drew attention to the use of YouTube annotations and overlays in order to draw viewers towards custom content rather than surrendering them to the algorithm.