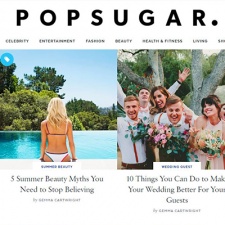 Media and tech company PopSugar has apologised for an ‘experiment’ that used masses of influencer-created content without seeking permission.

Fashionista reports that the site took ‘millions’ of pieces of content that showcased items that were for sale.

It used this content to create its own sales network, replacing the original RewardStyle affiliate links with alternative ShopStyle links that would instead ensure that it received any sales commission instead of the original creators.

ShopStyle, which used to be owned by PopSugar, has now suspended the company’s ability to use its system and is conducting a “thorough investigation”.

RewardStyle co-founder and president Amber Venz Box said: "As an influencer myself, I am fully aware of the investment required to create original content and it was disappointing to see more than 1,800 of my personal images displayed on PopSugar.com, stripped of all RewardStyle commissionable links and instead monetised by ShopStyle affiliate links.

"Our legal team continues to review the matter and we will circulate updated communications once we're able."

PopSugar has removed all of the content from its site. CEO and co-founder Brian Sugar has claimed that the whole thing was apparently an experiment that was supposed to remain internal. The company made $2,695 from the venture and says it will pay influencers what they are owed.