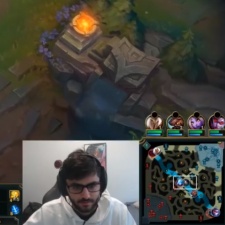 The Overwatch League Twitch channels moves up to the top spot this week, even after a 14.9 per cent decrease in views. The channel has racked up over 3.6 million hours watched in the last seven days.

Riot Games' Twitch channel is in second place as the NA League of Legends championship rolls on. League of Legends was also the most-watched title on Twitch last week. Streamer Shroud is in third for another week. Despite a 12.9 decrease in views, his Apex Legends content is still going strong.

League of Legends streamer loltyler1 is in fourth, after a huge 313 per cent increase in views last week. Loltyler1 is one of the biggest LoL personalities, so his presence on Twitch has caused a surge in views for the game.

Twitch channel Yassuo is a new entry in seventh. A League of Legends focused channel that has experienced a whopping 943.6 per cent increase in views, racking up over 1.3 million hours watched.

The chart closes with a Mixer channel, and this is the first time a Mixer channel has managed to break through to the top 10! The channel is PaladinsGame and it racked up over 1.1 million hours watched last week, which isn't just a feat for the channel, but also for Mixer itself.