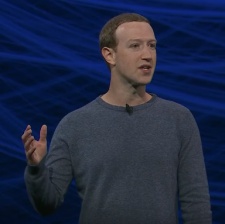 It's a loaded statement coming from a tech giant embroiled in data scandals, but the platform is dedicated to improving its features and privacy settings.

Facebook's annual F8 developer conference kicked off yesterday with a talk from the company's CEO and founder, Mark Zuckerberg.

After a quick chuckle and addressing that Facebook doesn't have the best reputation surrounding privacy right now, Zuckerberg moved on to detail some changes coming to the platform this year, as well as new developments for Facebook's other products, including Instagram, WhatsApp and Oculus.

Down with the newsfeed

Facebook unveiled a fresh redesign of its desktop and mobile apps, codenamed FB5. The mobile app went live in the US and Canada this week, with a global rollout coming in the next few months.

The platform's new face is cleaner and simpler, with a few additional features. Users can now bookmark a spot in the newsfeed so it doesn't refresh if they navigate to a different page. It will also, to the rejoice of many, have an optional dark mode.

The Facebook groups tab has also undergone an overhaul, giving users an organised glance at their current groups, alongside more personalised suggestions for new ones.

Sliding in the DMs

The platform has also unveiled Facebook Dating, a new feature that allows users to find dates and matches based on common interests. Dating profiles are separate from Facebook profiles, and activity shared through the dating feature is only visible to other users there.

On top of this, Facebook showed 'Secret Crush', a tool that lets users create a private list of users they may be 'interested' in. If two users add each other on to their secret crush list, they will be privately matched in a Tinder-esque fashion.

It also went into detail about plans to privatise like counts on Instagram. This update was unpicked last week by reverse-engineering expert Jane Manchun Wong. A lack of like count could impact how influencers engage with the platform specifically.

“We want your followers to focus on what you share, not how many likes your posts get. During this test, only the person who shares a post will see the total number of likes it gets," Instagram said last week.

Instagram is also taking steps to combat bullying online. It introduced 'Away Mode' which gives users the option to temporarily back away from the platform during sensitive life events without needing to delete or deactivate an account.

Facebook and Instagram are also now part of a Samaritans campaign to reduce harmful and abusive content on social media. Google and Snapchat are also involved with the project.

Facebook is taking down firms that provide fake followers and likes