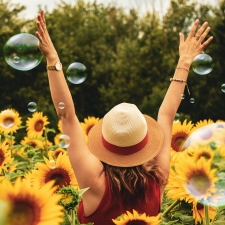 The internet can be a digital wild west filled with crazy personalities and fan communities, but it doesn’t always need to have a hostile vibe.

The majority of content creators and influencers grow in popularity by rising alongside waves of popular trends and explosive moments online, to which they foster large communities who are enthusiastic about their work.

But this often leads to online groups that become passionate about their fandom to the point of viciousness against anything at odds with what they like, taking on a hostile mob mentality.

What’s worse is when influencers who lead these groups refuse to take responsibility for their fans and fail to set a better example to those that follow them in favour of maintaining their momentum in popularity and relevancy.

This doesn’t have to be the norm however, as the actions of certain influencers have shown a better approach to growing a large community that is a self-sustaining force of positivity, while also being successful in their own right.

Ignorance is not bliss

The biggest hurdle that most large influencers face is trying to be unique while remaining relevant online. They want to express themselves, but they also need people to keep tuning into what they do and engaging with their content.

This kind of outreach is what keeps view counts, subscriptions, pledges, and brand deals sustainable over time, but it can lead to creators losing sight on the quality of the communities they build. Toxic stream chats, Twitter mobs and online attacks start to rise when influencers don't moderate their communities effectively.

Other creators have differentiated themselves by focusing on building fans groups that are large, engaging and positive. What does a positive community mean to them? It means having fans that assertively reach out to others to get involved while actively pushing out any negativity brought into their fandom.

An example of this can be seen in the content from Kinda Funny Games. The group frequently posts content that gives the audience something entertaining, but also encourages them to make their community more positive and welcoming to others.

If they see someone in their chat spouting hateful comments or bigotry, the group actively addresses and removes it without letting it linger, all while encouraging their viewers to point out or say something about other bad things they might see.

Because of this, their audience actively self-moderates itself - meaning any newcomers with intent to cause mischief will quickly be addressed or removed.

YouTuber and fighting game fan Maximillian is another example of positive community management. He's a creator who engages with the fighting game community (FGC) which has a reputation for being brash and hostile.

However, Maximillian is one of the few within that community who takes a very objective and assertive stance on changing the attitudes and behavior of the FGC for the better. By discussing real issues in his videos and condemning the bigotry he sees in the FGC, Maxmillian tries to shed light on what things can be done to better the FGC for everyone.

Stepping forward to take action towards more positivity and leading by example helps to encourage others within his community to do the same. The domino effect from it then leads to many others within the FGC caring about making their online community a better place for others, mainly from seeing their favourite personality care about it too.

This kind of assertive action towards positivity isn’t limited to the digital space over social media. It can be reinforced in the real world when fans meet their favourite influencers in person through fan meet ups, conventions and other kinds of events.

The ladies at Whats Good Games follow a similar approach to that of Kinda Funny, but in a real-world setting. They have real discussions with their fans and speak fairly on the tough topics related to the gaming community, but in person.

This shows their audience a layer of authenticity and it teaches them to act the same way online as they would offline.

Influencers like these show that a growing community online doesn’t have to solely be dependent on finding what’s hot now or following a wave to stay relevant while ignoring everything around them.

They show that content creators and influencers can put their energy into building an audience that makes the space they exist in more welcoming and less hostile while being successful.

If the majority of other popular influencers borrowed similar ideas on how they approach fostering their fan communities, then we would have a significantly better online space for people to thrive within.

Building a huge online audience is one thing, but a friendly, rational and safe community is an even greater accolade.