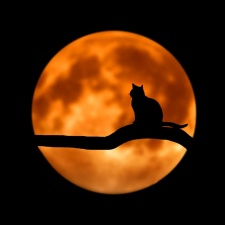 “This is the time for getting scary,” feminist writer Andi Zeisler told Elle Magazine on the eve of the 2017 Women’s March against Trump. “We need to go full witch.”

Witches are women with power. In history, this was too much power men felt comfortable with. Perceived as wild and dangerous, their wise and mystical ways were punished by death time and time again. While women are no longer persecuted for being witches, the craft still holds a strong, feminine energy.

According to a Pew Research study in 2017, millennials are the fastest demographic of all to strongly identify as spiritual rather than religious. When everything else is whooshing past at a million miles an hour, the witchy revolution provides millennials with a sense of grounding and focus.

Why is witchcraft spellbinding millennials? According to 25-year-old Valeria Ruelas, aka @TheMexicanWitch, it’s down to craving a sense of connection for something bigger, even otherworldly.

“In the age of Donald Trump, I notice an uptick in DMs after stressful current events,” Valeria told Cosmopolitan last year. With almost 34K followers, her deeply emotional and powerfully feminine energy is something young women yearn for.

Feminine spirituality in the media is nothing new. Horoscopes have been around forever. What’s different is the way technology now offers women a powerful platform to share their craft - and even make a living from it.

How do witch influencers differ from the rest?

According to professional witch and branding coach Shawn Engel (@WitchyWisdoms), there are two types of witch on Instagram: the real witches and the “fakes”.

She tells Cosmopolitan: “there are definitely fake witches online - people mashing together spiritual jargon in order to get a sale.”

Witch influencers generally make a living from tarot readings (Shawn charges $35 for hers, which she sends via email) and web masterclasses (witchcraft courses can cost more than $1,000 to enroll in online).

Those keeping the old, ancient power alive are more authentic with their marketing. They tend to avoid sponsored posts and only tend to hit the ‘post’ button when the cosmos aligns. Of course, they tap into trends and implement social strategies for optimal engagement and exposure - but the practice comes first.

We’re all tending to our own little corner and - whether we believe spells and tarot forecasts can help us or not - witchcraft is essentially a form of projecting positive energy into your own life. At its core, it’s self-care.