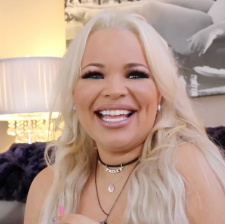 Trisha Paytas has drawn criticism for following in the footsteps of Kim Kardashian by promoting appetite suppressing lollipops on her Instagram channel.

“Okay, so I just got my hands on @flattummyco’s brand new product, and I had to share the deets,” she said in the promoted post. “They’re appetite suppressant lollipops… which I didn’t even know was a thing till now.

“I don’t know how they did it, but they’re super yum and made without artificial flavors or artificial preservatives! I already know I’m going to be bringing these around with me all summer and sharing with the girls. You should probably grab your own pack before they’re gone.”

She has since follwoed this up with a second promoted post.

The reactions have been predictably dire, with fans pointing out what they see as a certain level of hypocrisy.

“Gotta love influencers that claim to promote body positivity just to turn around and instead actually promote diet culture and disordered eating habits,” one said, while another add: “Very disappointed to see someone who stand as a role model for confidence and self-acceptance promote something like this.”

Kim Kardashian yesterday faced similar criticism for promoting the same product. In that instance it had appeared that she’d removed the post herself, but USA Today reports that it was Instagram that actually pulled the ad – although only ‘mistakenly’.

"We mistakenly removed content we shouldn’t have and apologized to Kim for the inconvenience caused," Instagram confirmed. "We worked quickly to rectify the mistake as soon as we were made aware."