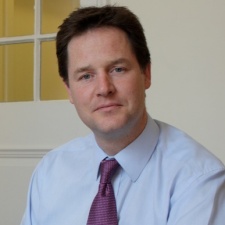 The surprise hire replaces previous incumbent Elliot Schrage, who leaves after 10 years at the company.

Nick Clegg was once a rising star in British politics. But written pledges by his party members to abolish University tuition fees, which went on to be raised as part of a coalition government between the Conservatives and Liberal Democrats, and dealing with other Tory policies while propping up the government saw that star dim over the years.

His decision to join Facebook comes at a time when the social network is facing criticism around the world for the negative impacts of its significant influence on society and even democracy.

Concerns include offering up too much private information to third-party companies on its users and the spread of fake news and offensive content.

In a post on Facebook, Clegg said he had been speaking with Facebook CEO Mark Zuckerberg and COO Sheryl Sandberg for months before agreeing to join.

It remains to be seen what kind of impact Clegg will have on Facebook moving forward. He'll be able to offer an insight into the inner workings of government, but this may at time come up against shareholder interests.

“I have been struck by their recognition that the company is on a journey which brings new responsibilities not only to the users of Facebook’s apps but to society at large,” said Clegg. “I hope I will be able to play a role in helping to navigate that journey.

"Facebook, WhatsApp, Messenger, Oculus and Instagram are at the heart of so many people’s everyday lives – but also at the heart of some of the most complex and difficult questions we face as a society: the privacy of the individual; the integrity of our democratic process; the tensions between local cultures and the global internet; the balance between free speech and prohibited content; the power and concerns around artificial intelligence; and the wellbeing of our children.

“I believe that Facebook must continue to play a role in finding answers to those questions – not by acting alone in Silicon Valley, but by working with people, organisations, governments and regulators around the world to ensure that technology is a force for good.”