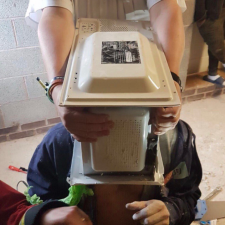 Firefighters commented that they were "seriously unimpressed" after being called out on Thursday evening, to free a YouTuber who had cemented his own head inside a microwave.

Jay Swingler, 22, became stuck after filling the oven with 7 bags of Polyfilla and then putting his head in it, which was wrapped in a plastic bag.

Swinder is known for pulling ridiculous pranks, but this one might have gone a little too far.

The microwave wasn't plugged in and was intended to be used as a mold, but the mixture set faster than expected, and Swingler struggled to breathe through the plastic tube his friends had fed to him.

The YouTuber documented the affair, and uploaded it to his YouTube channel.

The West Midlands fire service later tweeted that they were "seriously unimpressed" with the stunt, and pointed out that the time their staff spent there could have endangered someone else.

We hope that this serves as a warning to any of our readers that get the sudden urge to cover their heads in paste and dunk it in to a kitchen appliance.