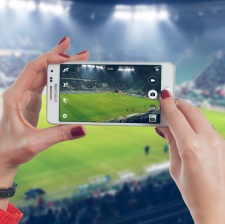 Curious about which teams and players have biggest influencer clout online? A new service from Filter Digital hopes to offer the answers.

Its new platform Sportstar Influencer measures a host of metrics including social, engagement, media, and sentiment datapoints to rate and rank sports players against each other. This data can then be compared at a local, national and international level.

The idea is that marketers can use the data as a tool when trying to identify suitable influencer marketing partners.

The site has kicked off by focusing on the biggest league of them all – the Premier League. Current data shows that title winners Manchester City are the top social team with a score of 919.5. They are followed by local rivals Manchester United, although United have over double the number of fans – 113.2m compared to 48m.

He must have a foot like a traction engine

The site will launch a World Cup dataset some time this month. In July it will branch out into tennis to coincide with the Wimbledon grand slam.

“Whilst working on a report for a client, it became clear that no single index existed for how influential sports players are, and how they compare to each other,” Filter Digital CEO Oliver Morrison said. “Sportstar Influencer changes that, allowing brands to understand which players can provide the most effective return on investment for marketing spend.”