Social media starlet Lil Tay has vanished from the internet 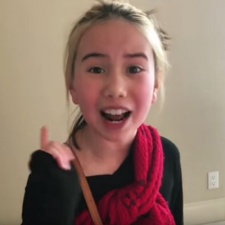 A nine-year old who was known for her wantonly vulgar behaviour has suddenly upped sticks and left the internet… for now.

Lil Tay, from Canada, became an established figure after a string of videos in which she epitomised the ‘spoilt rich kid’ stereotype – such as in this video where she appeared to be throwing around large handfuls of money with Jake Paul.

Essentially her shtick consisted of swearing, boasting about wealth and mocking the comparative poverty of her audience.

However, seemingly out of nowhere her YouTube channel has been deleted and her Instagram posts are gone, while other accounts associated with her have either been scrapped or made private.

The Verge reports that the move follows a rocky period for the youngster. A string of leaked videos have suggested that Lil Tay is fed her lines off-screen by brother Jason Tian – a lack of authenticity that appeared to come as a shock to some, bizarrely.

It has also been confirmed that her mother, Angela Tian, was either fired or quit her job as a real estate agent when it alleged that some Lil Tay footage had been shot in properties she was trying to sell. Indeed, Tay and her mother recently appeared on Good Morning America, where these allegations were denied.

Perhaps the worst allegation is that Lil Tay was caught on video smoking hookah, which is a type of Indian tobacco vaporiser.

Further reports suggest that the family has relocated to Los Angeles to work with social media marketer and Squad Social founder Josiah Jenkins.