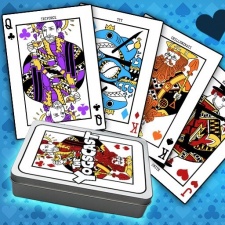 Media collective The Yogscast is under fire over one of their recent pieces of merchandise.

The company released a set of playing cards last night, all featuring creators from The Yogscast.

However, not one card featured a female member of the collective.

Fans took to Twitter to complain about the decision, as did some female creators of the group.

Yogscast streamer Radderss pointed out that "quite a portion of the Yogs these days" are women, and should have been included.

Another female Yogs member, Zoey Proasheck, simply said: "where the women at.".

Who run the world?

Of course, this decision contributes to a larger conversation about the underlying yet everpresent sexism in games. While the decision to not include any female creators could have been unintentional, it still represents a exclusionary attitude we should be moving away from.

In a climate where sexism is still rampant after a recent dive in to sexist culture at Riot Games, as well as conversation surrounding Ninja's choice to not stream with women, it's almost impossible to address when the right bodies don't lead by example.