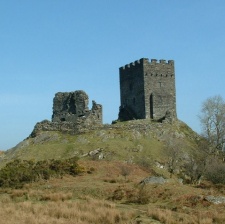 From the 16th October, the Visit Mid Wales page will host a series of streams that'll show off a number of picturesque locations around the country.

There will be four streams across the same amount of days, showcasing views from the Cardigan Bay Coast, Hafren Forest, Ynyshir RSPB Reserve and Mwnt Beach.

The streams will also be shared on pages belonging The National Trust Cymeu, Hafren Dyfrdwy, RSPB and Natural Resources Wales.

This series falls in to the 'Slow TV' trend currently emerging online. Viewers are becoming fascinated with the relaxed pace of slow, ambient videos.

Social media firm Populate Social will also be stepping in to oversee the campaign, as well as video production company Nemorin.

"Mid Wales is a fantastic region and one which is within easy reach of the majority of the UK within a few hours," Said Visit Mid Wales chief executive Val Hawkins.

“The aim for the campaign is to capture and share the region’s beauty in a way which is raw, giving people a few moments where they can truly escape from whatever they are doing and experience being out in the beautiful nature that Mid Wales has to offer.”