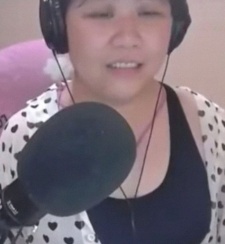 During a stream on Chinese live-streaming platform, a streamer’s identity was revealed to not match the images she had previously uploaded.

Qiaobiluo Dianxia, also known as Your Highness Qiao Biluo, had been streaming on platform DouYu where a glitch occurred revealing her real identity.

Qiaobiluo had been uploading images of a younger girl, under the guise that was her true identity. However, when streaming, Qiaobiuo refused to show her face and encouraged audiences to donate to her. If a milestone amount was hit, she would reveal her identity.

Though while streaming with vlogger Qingzi, her face was covered with a cartoon still, stating in the stream that “I can’t show my face until I receive gifts worth 100,000 yeun. After all, I’m a good looking host.”

However, during the stream, a technical difficulty occurred, and the obstructive cartoon disappeared, revealing Qiaobiluo’s real face.

Audiences noticed that the streamer’s image didn’t match the preconceptions of their image of the streamer.

The BBC reports that male viewers have since stopped following Qiaobiluo, and have withdrawn their transaction safter seeing her face. In China, facial alterations are popular, with 425 million live-streamers using face filters.

This isn't an isolated incident of influencers fabricating truth for views. Earlier this year, content creator Sketchek, returned to YouTube after claiming a terminal illness three years prior, admitting that the story was fabricated.

“I thought it would be fun to convince a lot of people that care about me that I would f****** die,” Sketchek said, speaking to PCGamesN.

“I’ve been feeling really bad about it lately. I can no longer bear the weight of my sins, which is why I’ve decided to come out with the truth and apologise for lying.”