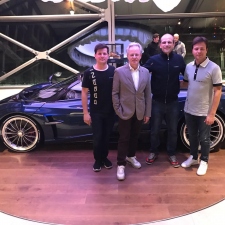 Pascal Clarysse started looking for so-called Growth Hacks a good decade before the buzzword was coined.

Clarysse used to be the marketing driving force at Lik-Sang.com, where he was in charge of relentlessly spotting new trends, waves and magic holes. In recent years, he's served as a marketing consultant for various indie studios, participating in launching mobile games and the occasional Kickstarter campaign.

Pascal Clarysse is CMO at large at Eden Games.

It all started with a short Skype call; Eden Games had just signed the licensing rights to the Pagani supercars.

After visiting the new Pagani factory in Modena for a licensors workshop, David Nadal, CEO and founder of the Lyon game studio, told me that a) the food was incredible, and b) I should get in touch with a special man called Michael Staskin, Marketing Strategist for Pagani. He thinks differently, you’re going to like him.

I spoke to Michael for half an hour in December, just before Christmas, and we hit it off immediately. "This man is going to become my best friend͟." I matter-of-factly reported back to David.

In the automotive industry, the general tendency is to treat video games as an after-thought and a licensor to control under strict rules. Michael was refreshingly different. He had handled the Ferrari contract for Mattel in a previous life and he had worked for SEGA GameWorks and ngmoco too. He knew the needs and sources of frustration on our side of the screen and he shared more creative ideas over a few minutes than I had heard over the whole year.

When Michael suggested working together at the Geneva Motor Show -, launching the Pagani Huayra Roadster at the mecca of Motor Shows and in Gear.Club simultaneously, not only did we say yes (!) but we also wanted to add a little something special that would intrigue even a company as innovative as Pagani. So we dusted off our so-called “Big Event” plan, peppered a few Pagani logos over the presentation deck and sent it over to Michael.

We first conjured up the “Big Event” on the sunny balcony of the Eden Games’ Lyon office in the Spring of… 2015. Before even soft-launching the game we were just brainstorming loosely about marketing. The idea was simple but not easy to execute: bring top YouTubers to a track and let them play Gear.Club while a pro driver takes them for a spin – see who can handle the adrenaline and score the best lap time. The idea immediately resonated with us internally.

It proved to be a much harder sell with car manufacturers. A lot of marketers had liked our idea. But a lot of lawyers had killed it. In an industry where most companies are responsible for thousands of employees and have sometimes a century of history to live up to, being a little risk-averse is only natural.

Michael Staskin and Pagani were different. They are driven by innovation, in science, in aesthetics, or any other field of activity they touch, and you can sense this in their every word and action. A mere 48-hours after telling us “let me check with Luca [Venturi – Head of Communication]”, Michael came back with a “let’s do it!”.

A week later, just before Christmas, we received the mission details. We had ourselves a race, and a pretty tight one at that!

The Pagani Huayra Roadster was about to launch at the Geneva Motor Show 2017 on March 7. The Pagani engineers would work on the car until March 2. It would then fly to Switzerland on March 4. So, our stunt had to happen in Modena on March 3, or not at all.

AND... The digital Pagani Huayra Roadster had to be ready to play in Gear.Club at the same time the physical car launched on March 7!

What happened next was nothing short of a miracle. A mad rush of 90 days on both sides. 30 people crunching data day and night for three months at Eden Games’ studio in Lyon to get the car ready on time in the game.

There was the added pressure that a concurrent launch means that every time the Pagani engineers made a change to the physical car, we had to replicate it on the digital side of things.

For example, making the rims of the Geneva edition golden on one side and silver on the other. Could you tell which color was on which rim at GIMS 2017? Ask Christophe Champlong or J-P Maras at Eden Games if you’re unsure. Those guys still have sleepless nights thinking about it!

Furthermore, since an unfinished car didn’t yet exist, it hadn’t been driven on actual roads. So we had to assume a lot of car behavior based on the preceding Huayra BC just to feed something into our physics engine and AI and then swap the data for the real information at the eleventh hour.

As for the marketing assets to be produced, Jean-Philippe Maras, aka. Monsieur Cinéma and Frédéric Osterero created all their video and static images in such a way that the cars were basically placeholders which could be smoothly swapped for the final model once available. Never say the words “rendering time” in front of them again.

The Pagani Huayra Roadster was approved by Pagani on March 6 and by Apple and Google on March 7... Just in time without a second to spare.

The Pagani Huayra Roadster was unveiled in Gear.Club through a special week-long championship, and if players won all the 30 tracks specifically designed for this event by Gauthier Roussel and his team, they got to keep the car in its exclusive GIMS 2017 look.

Coding the event alone required two months of work by 4 of Eden Games engineers. The championship was available in the Pagani Performance Shop, which appeared especially for the occasion, and was an pixel for pixel reproduction of the Pagani factory in Modena, based on photographs David Nadal had taken during his first visit.

All of the above was play-tested by 6 people working under the leadership of Jérémy Bonnaud. And if you think playing games is not a job, think again: testing all races required 6 hours of continuous play. And the objective is not to win or have fun, it is to crash everywhere to see what happens and if the physics go wrong anywhere. QA-testing is probably the least enjoyable way of using a video game.

In addition to the digital show, the Eden Games dev team also had to produce a special demo version of the game for the shoot of the YouTube event itself. The plan was to take each YouTuber around the Autodromo di Modena track for a warm-up lap, a hot lap and a cool-down lap and have them play during the warm-up lap. But they had to play in high-speed conditions with a lot of hard braking and hard-hitting apex turns.

The dev crew had to ensure the game could be played offline as we couldn’t rely on Wi-Fi for this one. Then, as the gyroscope accelerometer controls were not an option as they would be skewed by the G-force, we optimized the game for button play only, letting the car accelerate on its own.

Last but not least, although not approved for public consumption yet, the Pagani Huayra Roadster had to be the playable car in this demo. Props to Jean-Yves Geffroy and team for making this happen. The two iPad Air 2s – always have a back-up for anything that could break – were delivered to me in person the day before showtime, along with the instructions for me, “don’t forget this at a bar if you get drunk.”

Big shout-out to Nadège de Bergevin as well, who booked so many flights and hotel rooms she still must have nightmares about it to this day.

F2 FreeStylers zipping in and out from L.A., Epic Meal Time from Montreal and Toronto, Yiannimize and Black Panthaa flying in from London Heathrow, and Dvlz Station straight from Bahrain. Only one of them missed his flight. He was from the London gang and there was a next plane to Bologna at 8am the following morning so he got there just in time – he was sweating a lot though.

Once everything is set up and everyone is ready to roll, you start worrying about the uncontrollable weather… “What if there’s a storm over Bologna this afternoon?” Our GT Championship-winning driver Andrea Palma calmed me down instantly with his succinct answer in a casual and confident tone: “I run wet.” We were in safe hands, everything was going to be fine.

As it turns out, it didn’t rain and we were bathed in glorious sunshine for the whole of the shoot. The day itself will remain unforgettable to all participants. I will spare the thousands of words I could use to describe the experience; instead there is a video play-list on YouTube for that which has generated well over a million of views to date:

The video production couldn't have happened without the mad geniuses over at Red Pill. They received a loose script 10 days before shooting, had a day on the ground to capture it all and 3 days to edit through 25 terabytes of footage. They too pulled a rabbit out of a hat on this one.

They also had hard drives ready for each and every influencer containing both their own personal footage and a bank of “great stuff” for them to pick up at the hotel reception the morning after the shoot on their way to the airport. Nice touch, guys.

Marketing, Engineering and Production teams at Pagani and Eden Games collaborated in such a refreshingly open fashion to make this happen that it wasn't clear in the end who worked for who -- fantastic emulation, with Michael Staskin and Luca Venturi at Pagani pulling all the stops and opening all the doors for us. Incredibly driven people.

Even Horacio Pagani came down to hang out with us for a few minutes, and no-one is forgetting that handshake either. I left Modena with a Pagani sweatshirt in my backpack and I wear it so often that my CEO is starting to worry.

This. This is a true partnership; beyond the buzzwords.

Viral Visionaries - does Steam have what it takes to enter the streaming space?