What the heck is VRChat and why are YouTubers going crazy for it? 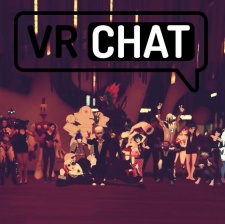 Back in June a friend of mine bought an Oculus Rift. A few days later he was excitedly warbling at me about a social app he'd found on Steam called VRChat.

It wasn't very popular at the time, with maybe 500 players. VRChat now boasts over 12,000 concurrent users, a massive milestone for such a small dev team.

While its main draw is its immersive virtual reality aspects, the client can be downloaded and played on PC like any other game. Players don't need a VR headset to participate.

According to SteamSpy, the title shot from 200k owners in mid-December, to 850k by January 7th. It's expected that it'll hit a million owners within a month. A crazy amount of growth for a niché, community driven VR social tool.

In it's simplest form, VRChat is a virtual social network. Players can enter an immersive VR environment with their own personal avatar, explore virtual locations and chat to other players.

While there's a number of pre-made environments and avatars available for players to choose from, the possibilities are endless. If players have the skills (or know someone who does) they can create full customised avatars and maps and upload them in to VRChat.

The VRChat team and community also hosts a number of events for the community to get involved with, including D&D sessions, party games and even a VR stand-up comedy night.

How does it work?

Dropping in to a virtual chat room may sound like hell, but VRChat's design endeavours to make the experience as realistic as possible - as realistic as talking to a 4ft model of Knuckles the Echnidna can be, anyway.

The 3D spatialised audio function prioritises the audio of your friends, so it's easier to hear the conversations you're a part of, as opposed to random garble going on around you.

Players can use emotes, emoji and hand gestures to communicate fully with your entire body. VRChat's pre-built avatars have incredible Inverse Kinematics technology, allowing models to match your own speech and have eyes that actually look at you for an authentic social experience.

The avatars also track your movement, so players in-game can see you flail around as wildly as you are in real life.

As the VRChat community grew, users began recording their experiences and uploading them to YouTube. A video by user Chris Patstone contributed to this. 'Have you seen my son?' was five minutes of Patstone with a model of Marlin from Disney's Finding Nemo asking users where Nemo was.

This level of creative genius has over 414k views on YouTube and has inspired many others to document and share their adventures in VRChat.

The way of VRChat

Just like all great internet stories, VRChat's current wave of success is owed to meme culture. However, the app is definitely more important to those using it for good.

"I think why I personally enjoy VRChat is because no two dives in to it are the same," YouTube creator Martyn 'InTheLittleWood' Littlewood tells InfluencerUpdate.

"The name would suggest that it's just going to be people hanging out in a virtual space getting to know each other, but there's no 'asl?' or other awkward conversation."

"Instead, you could be met with a stand-up comedy show, you could go bowling, you could wander in to a murder mystery, one world could be filled with role-players all staying in character whilst looking like Dragonball characters."

"It's such a fun and infinite platform for improv, and as someone who's always wanted to try improv comedy, it's a good training ground."

VR YouTuber JadeKVR tells us: "VRChat is one of the best social VR experiences, because there are unlimited worlds and custom avatars meaning that you can be whoever you want to be in the metaverse.

"This also results in many fun interactions when looking to create entertaining content."

The sheer spontaneity of the community in VRChat means that new users are continually surprised by what they see and find. It's very likely that you'll stumble in to some sort of on-going joke, community event or just pure nonsense that makes for great content.

"I love VRChat because as a content creator, I can 'physically' get together with my community in it," says Twitch streamer Doornebuzz.

"It offers a bridge to get to know your viewers better. I also love the random little interactions that you can have with someone you've just stumbled into. The game is a community in itself. We're all getting together and socialising in this medium that we all love: video games.

"VR gives it that extra layer, of being able to stretch out your arm and, in a way, touch someone. Having to communicate through voice chat makes it more personal too. I think it's definitely made some people feel a lot less lonely, like when everyone was able to celebrate New Year's Eve in the game. Things like that warm my heart."

VRChat is one of the biggest social apps for VR, but its current rise in popularity hasn't been entirely accepted by the core VRChat community.

"VRChat had a very close, welcoming community initially," says VRChat user Dicidius, who has been a part of VRChat for since last year and regularly runs D&D events in the app.

"If a new person joined, you'd be shown around the worlds, be taken to events and be kindly integrated in to the community.

"Now, because of this influx of users, anyone new who joins is immediately swamped with people calling them names and shouting vile and disgusting things at players just for shock value. People are now avoiding the hub world because the amount of vitriol in it, and that used to be a great meeting place for players.

"It feels like a lot of what made VRChat so compelling in the first place has been lost under those using it to make clickbait content. Now no-one wants to explore new areas because they're put off by the people peddling memes and bad jokes."

"That's not to say it hasn't helped VRChat at all. Some of the new jokes and events are great and it's cool to see new players breaking the mould a little."

As the fad fades, VRChat might settle back down. The problem lies with the accessibility of the program; as a free client that anyone can download and play. It's certain that the VRChat ream will need to keep an eye on the community and monitor toxic behaviour that seems to inevitably come with these platforms.

However, it may be that this platform should have remained a hidden gem, to protect the vibrant yet delicate community that the app has managed to nurture on it's own, free of any kind of viral support.

VRChat is certainly an interesting platform. VR's main pull is immersion and VRChat focuses in on the purest instance of that; simply being in a room with other people and being able to connect with them.