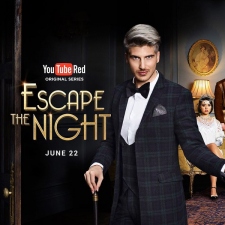 The upside? Full creative control of the videos; no annoying ads and a dedicated revenue stream. The downside? Your viewers have to pay $10 a month for the privilege and the service is only available in the US, Mexico, Australia and South Korea.

However, YouTube CEO Susan Wojcicki recently told the Code Media conference that “many more countries” were on the cards for the service.

“Our goal is to be a large, leading video platform and have a large diverse set of content,” she said.

“There are all these categories that no one is really providing a solution to. Shows and movies is a very competitive space; and it needs to be paid for economically with a subscription service.”

The first person to release a series through YouTube Red was the platform’s favourite statistical anomaly, PewDieOie. Felix Kjellberg’s ‘Scare PewDiePie’ series documented the gamer encountering terrifying scenarios based on the games he plays on his channel.

The series ran from February 2016 to April 2016. A second series of Scare PewDiePie was planned but later cancelled as PewDiePie lost support from Maker Studios and subsequently his advertisers.

A similar thing happened to Logan Paul; his upcoming YouTube Red Movie was suspended and his involvement with Red show 'Foursome' ceased after he caused controversy by uploading footage of a dead body to his channel in early 2018.

2017 saw a steady decline in monetisation on YouTube due to waves of advertisers pulling out of the platform, the so-called 'adpocalypse'.

More and more content is being deemed ‘unfriendly' to advertisers and many YouTubers outside of Google’s preferred program are not pulling in the figures that they once could from adverts.

For gaming critic TotalBiscuit, YouTube Red was said to be making up a whopping 40 per cent of his channel’s revenue in August 2017. He suggested in future that this subscription format could even supplant the need to have advertisers altogether.

It seems that YouTube will follow in the footsteps of sites like Twitch, where creators make their revenue through monthly subscriptions and donations. Red is looking tantalising to creators who are starting to struggle.

However, YouTube Red is designed to be a portal to high quality, longer, more costly content - TV-grade content that is paid for by YouTube to entice people into subscribing to all of the content on offer. The ‘Red income’ makes up such a large proportion of revenue because of the money that goes into making and presenting it.

A channel’s non-Red content stands to benefit too because of increased watch time as a whole. However, the dollars a month that consumers pay for YouTube Red is divided by how much they watch a specific channel. This means that if one person watches PewDiePie’s channel 50 per cent of the time, the channel will receive 50 per cent of that 10 dollars.

All of the creators currently using YouTube Red are already making a substantial amount from their content, and sit well over the average subscriber mark. That covers but a small fraction of the people that make a living from YouTube who’s channels aren’t eligible for Red support, and the amount they’re able to earn is seemingly getting smaller and smaller.

The argument is whether these creators should start to use Red to supplement the content that they’re already making. If they’re able to continue at all then they must be making revenue, so why should fans pay to supplement content if YouTube is already backing it?

A handful of creators with large, enthusiastic communities have begun setting up Patreon accounts in order to make their craft sustainable and offer rewards to those who support it. Unfortunately, this isn’t a feasible option for everyone.

YouTube recently announced that it would be rolling out subscription-based services for streamers. Great news, if you livestream, but it’s still not an improvement for creators making videos. There will again be an option for viewers to subscribe to the content if they wish, but there’s no inclination for them to do so.

The big question is what will happen to the YouTube creators that can no longer sustain themselves on the platform. There isn’t another large video platform for them to move to and streaming arguably only really appeals to gamers at this stage.

There’s also an ethical debate within YouTube Gaming itself. It’s common knowledge that YouTubers are often offered sponsorship from developers and companies in exchange for positive coverage. This of course adds to their revenue, but also adds a new level of moral conspicuousness.

YouTube Gamers already sit in a grey area between journalists and entertainers who simply use video games as a medium. There’s often a presumption that influencers giving positive praise to a product have been paid to do so - whether that’s actually the case or not.

PewDiePie was under fire last year for not addressing a case of inappropriate disclosure dating back to 2014.

Fortunately, consistent lack of disclosure from YouTubers led the FTC to revise their rules in November 2017.

As sustaining revenue gets harder, it’s safe to assume that creators may be more inclined to accept brand partnerships or a YouTube Red deal.

The downside is that YouTube Red is only seemingly offered to the creators that are already generating a large amount of revenue.

YouTube is like any other online platform, in that it is prone to superfluous changes that won’t appeal to everyone that uses it. Not every change will benefit every bracket of creators, but they certainly should benefit a large proportion.

YouTube is also a platform that is arguably too big to fail, and isn’t under immediate threat by any other similar services.

As it stands, YouTube Red is only an option to content creators to those who are already sustaining themselves on the platform, and they're well in to the millions in terms of subscribers.

With this being the case, can YouTube Red evolve to benefit all creators, not just the ones in and surrounding Google's preferred program, or will it slowly alienate the creators that made the platform what it is today in order to favour it's top tier?