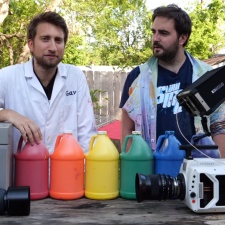 Somewhere in Texas, a house sits completely empty. Noises echo around the barren rooms and hallways, holding no furniture, and containing no residents.

This house is not a home, but it holds a purpose. It is used purely for its overgrown back garden in order to film various things in super slow motion.

The Slo Mo Guys have 11 million subscribers and 1.5 billion views. Their premise is simple: take a high-speed camera, and film stuff. Their videos started out in 2010 using cheap disposable barbeques, old televisions and rickety tables in their back garden. Traditionally with successful productions, you’d expect me to say that they’re now in their own studio with a full production crew.

For some videos, including their recent YouTube Red series The Slo Mo Show, they are. But for the most part, they remain in a back garden playing around with bits and bobs from Home Depot. They have a hugely successful business and the assistance of media giant Rooster Teeth backing their channel, so why keep their production elements so simple? The answer itself is simple: they are designed to be.

The Slo Mo Guys creator Gavin Free has often said that their success is partly to do with not just the slow-motion footage they’re creating, but the personalities that they bring to the videos. And on YouTube, personality can go a long way.

People often want to relate with influencers they watch and connect with them on a personal and human way. The last thing influencers want to do is to disrupt that connection. The world of on-screen online personalities was born to differ from polished, scripted traditional media.

Creating content for YouTube is all about consistency. Keep up regular uploads and the site will treat you nicely. However, that’s not the only form of consistency that keeps audiences engaged.

Yogscast member and Minecraft gamer Bea 'BasicallyBea' Baron says that “even a slight deviation from the content I normally create can have a significant impact on my channel”. With the fear of deviation looming over influencers, time and effort must be spent on forming an environment that audiences are familiar with, and can consistently recognise.

Back in November, the popular let’s play channel Game Grumps was hit with the consequences of deviating from the norm. Every Halloween they play horror games with different titles and animations under the name of Ghoul Grumps – but not this year.

What followed was anger, disappointment and general backlash from their community which caused the creator Arin Hanson to release an 11-minute video apologising for not repeating the tradition. This is no minor issue for creators – it can be big.

Changing a format can put influencers between a rock and a hard place. On the one hand, creators can be criticised for doing the same format, style or content repeatedly. But when they stray from the norm, their audiences can respond negatively. So what is the solution?

In general, it’s up to the creator. While some channels such as NerdCubed go through lots of series and format changes and attempt to challenge the norm, others try their hardest to make a viewer’s first video feel and look the same as their hundredth, like The Slo Mo Guys.

Algorithms and audience satisfaction are unpredictable beasts most of the time, so most influencers are simply rolling with what works for them and their viewers. But should everyone be challenging the norm, and pushing their audience’s boundaries? Or is it best to leave what works alone and let us sit back and enjoy that same, good-old, reliable back garden? Creators, it’s your call.