Influencers and creators were out in force at E3 2018 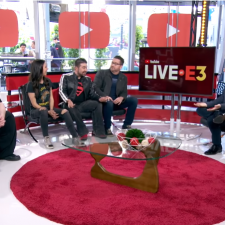 Creators have been slowly creeping into the folds of E3 organisation, and this year showed no signs of letting up.

Streamers and YouTubers were spotted during conferences and game reveals, and even had their own separate shows going on during this year’s E3.

YouTube hosted two eight hour live streams with a host of guests, content and creator-centric entertainment. Hosted by Geoff Keighley, the streams ran throughout the day, featuring exclusive interviews and discussions with both developers and influencers.

YouTube’s affair kicked off on Sunday June 10 after EA's show, and a bunch of YouTube creators came together to discuss what had been revealed. AngryJoe, Boogie2988, Kyle Bosman and iJustine had a chat about upcoming titles from EA, with specific focus on Sea of Solitude, Unravel Two and EA’s new sci-fi epic, Anthem.

Monday’s stream featured another host of creators sharing their thoughts on the reveals. After the Square Enix conference, Keighley handed the stream over to TypicalGamer, CaptainSparklez and MiniLadd to share their thoughts on the latest reveals from the developer. The trio shared their combined excitement for the next installment in the Just Cause series.

Rooster Teeth has also been hosting regular streams throughout E3; every day at 6pm the team goes live to discuss conferences, game reveals and updates as they break.

Tuesday was a super special day for Fortnite star Ninja. The streamer popped over to discuss his streaming life with Keighley, as well as his insane internet rise over the past six months. Ninja was also presented with his diamond play button during the interview.

Ninja stuck around to gift viewers some live Fortnite with some special guests, including rapper Marshmello and L.A. Lakers player Josh Hart.

YouTubers Ali-A and Vikkstar chatted to Keighley later in the day about the Fortnite Pro-Am tournament. The pair discussed the how the tournament works, who’ll be turning up, and the difficulties that come as a pro Fortnite player playing with a teammate that isn’t so hot.

Content creators and influencers are starting to become an integral compenent to video game marketing, and for good reason. Each creator has an enthusiastic, well-tuned and engaged audience that can produce incredible results for a title, regardless of the sub count being in the thousands or millions.

If an influencer has built their brand and livelihood around a title, it makes total sense to have them as an ambassador for that game or a similar one. I think it's great to see so many creators doing their thing out at E3; for the most part they're as passionate and excited about video games as the developers and journalists are.