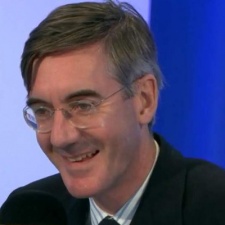 Tory minister and Brexit advocate Jacob Rees-Mogg has joined Snapchat in a self-professed move to better connect with younger voters.

“It's the cutting edge of social media that has just taken over from the gramophone record,” he joked, as reported by The Telegraph.

Although it’s of course entirely possible that this is not a joke at all. In 2017 Rees-Mogg, who is father to six children, confessed to LBC that he had never changed a nappy.

“I don’t think nanny would approve because I’m sure she’d think I wouldn’t do it properly,” he said to the host (who was Nigel Farage, incidentally). “Bearing in mind this is the nanny that has worked for my family, in September, for 52 years – so she knows a thing or two about doing it properly.

“I’ve made no pretence to be a modern man at all, ever.”

Among Ress-Mogg’s early Snapchat musings were the claim that the EU is a “failing organisation” that is in “desperate trouble” and whose finances “are in a dreadful state”. He went on to paint the picture that the EU is on the brink of collapse and its only hope is Britain’s continued paid membership. He also posted a video of himself trying to teach his one -year-old son the word ‘Brexit’.

It is not our place to tell you, dear reader, about the sheer dumbfounding lunacy of Brexit. Nor will we make any analogies about Ress-Mogg having a habit of joining sinking ships. We may, however, direct you to LBC’s later coverage of Rees-Mogg in which they lambast him for spreading economic lies about Brexit. You might also want to check out this piece on The Independent entitled ‘Beneath the mask, Jacob Rees-Mogg is a dangerous and deceitful bully on secondment from the 18th century’.

What you must check out, however, is Rees-Mogg’s guest appearance on the Ali G show: