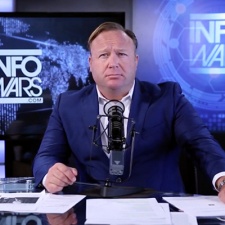 Alex Jones has received another strike from YouTube for violating community guidelines.

Four videos were removed from the channel that contained hate speech and child endangerment.

Two out of the four videos contained racist remarks against Muslims, one video contained transphobia and the final video showed a child being pushed to the ground by a grown man under a headline of “How to prevent liberalism.”

The video showing the child being pushed was posted to several channels and all of these videos have been removed.

Jones’ channel previously received a strike in February after promoting a false theory that survivors from the Parkland, Florida shooting were actors.

YouTube channels are terminated if they receive three strikes in a three month period. As this last incident was in February, the channel currently only has one strike on it.

Even though four videos were removed from the channel, they were collected together into a single strike and not four separate strikes.

If the four videos were posted further apart, individual strikes would of been issued and the channel would have been removed from the website.

With the single strike in place, the channel in question is not allowed to stream live on YouTube for a 90 day period.

“We have longstanding policies against child endangerment and hate speech,” a YouTube spokeswoman said in a statement. “We apply our policies consistently according to the content in the videos, regardless of the speaker or the channel. We also have a clear three-strikes policy and we terminate channels when they receive three strikes in three months.”