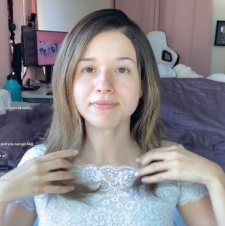 In another demonstration of abhorrence, a popular female Twitch creator has come under fire for "catfishing" her fans.

She then proceeded to spend the next two and a half hours applying make-up and styling her hair while chatting with viewers about how detailed the process is.

However, the stream was not well-received by many followers and cyberspace dwellers, hurling abuse at the streamer and calling her "ugly" and "horrifying". Some Twitter users also called her a "catfish", implying that she's actually two different people.

“I know not having makeup on is unusual, and some people might meme me for it, or say whatever,” Anys said in the stream. “But I think it’s good to not always just be promoting, ‘I look like this naturally.’ Because girls just don’t. When you have makeup on, you look like you have makeup on.

For those not in the know, make-up is a blanket term used to describe cosmetic products such as lipstick or eyeliner. Its general purpose is to enhance or alter a person's appearance.

Anys responded to the backlash on Twitter with another batch of make-up free selfies, saying "no one looks good 24/7" and that "we're all only human".

Fellow streamers rallied to support Anys on Twitter, posting selfies and messages of support. Twitch streamer Girlwithyellowspoon tweeted photos of herself with a caption stating that "girls aren’t born with black lines on their eyes, their skin isn’t flawless, and get this, their hair isn’t perfect when they wake up either".

Anys responded to the messages of support with a follow-up tweet, saying "man am I lucky to have real friends who love me for who I am. I’m at peace with myself, my body, and my imperfections - and I wish the same someday for anyone who feels the need to hate on someone else for such shallow reasons.”