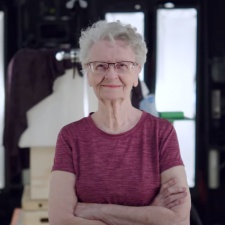 Back in November 2018, a petition floated around the internet to get 'Skyrim Grandma' Shirley Curry into the next Elder Scrolls installment.

After 50,000 signatures were gathered, Curry is now confirmed to be added to the game as an NPC. The announcement was made during Bethesda's 25th-anniversary live stream by Todd Howard, Bethesda’s director and executive producer.

If you're unfamiliar, Curry is an 82-year-old grandmother living in Virginia, USA. She shot to prominence after beginning to post Skyrim letsplays to her YouTube channel. The Elder Scrolls community took a shine to Curry's lovely content, and she currently has over 500,000 subscribers.

Along with the announcement, the live stream showed Curry visiting Bethesda’s studio and being 3D scanned for her model to be added into the game during development.

In a clip shown during the stream, Shirley commented about the opportunity: “this means a lot to me, as I would be extremely happy to know someone else was playing with my character in a future Elder Scrolls game.”

Curry also tweeted about the experience and shared a short video of her chatting with Howard at Bethesda's offices.