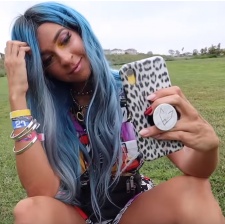 It's no secret that the posts we see on social media are often ridiculously embellished.

28-year-old YouTube vlogger Gabbie Hanna decided to challenge this with a social study of her own - pretended to go to the annual Coachella festival.

Utilising a combination of photoshopped images, coloured wigs, and footage from friends that actually attended the event, Hanna managed to make her Instagram look as though she had attended Coachella.

According to Hanna, she did the experiment to prove just how easy it is to lie over social media, though she has nothing against the Coachella event itself.

After posting the photos on her Instagram page, she received a lot of praise. The first photo didn’t raise any suspicion, but after the second and third went up a few commenters started to notice.

She went on to comment on the experiment over her Instagram after more comments began to pop up.

“I don't feel comfortable lying. I'm really sorry if you guys feel duped. But it was just sort of like an April Fools' ...three weeks late, Hanna said.

"Just don't base your life off of the few posts a week from your favorite influencer living this glamorous, amazing, colourful, saturated, hip, trendy, amazing life. Because the whole time I was living my best life at Coachella, I was really, uh, for the most part, sitting in this editing chair.”

Hanna also released a video to her YouTube channel explaining why she performed the experiment, as well as documenting what she actually got up to over the Coachella weekend.