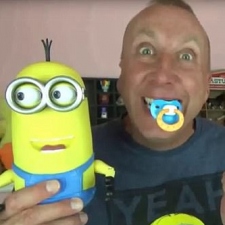 This month’s debate about disturbing YouTube channels aimed at and/or starring children has claimed a high-profile scalp: Toy Freaks.

The channel had 7.1 million subscribers and more than 6bn lifetime video views, but anyone visiting it now merely sees the message “This account has been terminated for violating YouTube's Community Guidelines”.

Toy Freaks was one of the channels called out in a popular blog post on Medium earlier this month, which outlined some of the child-unfriendly videos and channels available on YouTube.

“Toy Freaks specialises in gross-out situations, as well as activities which many, many viewers feel border on abuse and exploitation, if not cross the line entirely, including videos of the children vomiting and in pain,” wrote author James Bridle in that post.

A statement from Google issued to TechCrunch suggested that the termination of Toy Freaks is part of a bigger crackdown on these kinds of channels.

“We take child safety extremely seriously and have clear policies against child endangerment. We recently tightened the enforcement of these policies to tackle content featuring minors where we receive signals that cause concern,” it explained.

“It’s not always clear that the uploader of the content intends to break our rules, but we may still remove their videos to help protect viewers, uploaders and children. We’ve terminated the Toy Freaks channel for violation of our policies.”

The piece also quotes Toy Freaks co-founder Greg Chism, who appears to have accepted the ban.

“Earlier this week, YouTube informed me of concerns that my videos were attracting audience members who do not have childrens’ best interests in their hearts. Many YouTube community members expressed similar concerns, and their willingness to reach out to protect my children and all children from exploitation reinforces my faith in the YouTube community,” he said.

“While it is disturbing to me that anyone would find inappropriate pleasure in our video skits, I deeply appreciate YouTube’s concerns for my family and I could not be happier with having had this remarkable experience.”

YouTube is clearly aware that accusations of inappropriate content sneaking through the filters on its dedicated YouTube Kids app – let alone allegations that children featured on YouTube channels are being exploited – are toxic for its reputation.

Policing a service where people are watching more than a billion hours of video a day is an unenviable task, but YouTube has been launching some features recently to help it protect younger viewers.

Earlier in November, the company launched ‘Kid Profiles’ in the US for YouTube Kids, which it’s trying to expand to slightly older children, giving parents a role in deciding what they can watch.

“Coming soon, we'll give parents the option to have more content available in the app experience for their child,” announced YouTube Kids’ engineering director Balaji Srinivasan. “Our team is working to identify the most relevant content categories for tweens to make the app even more awesome.”

It’s often tweens who gravitate towards the kind of gross-out content that their parents would rather they didn’t watch, so walking the line correctly will be an important challenge: not just for YouTube, but for any channels and influencers with young audiences.