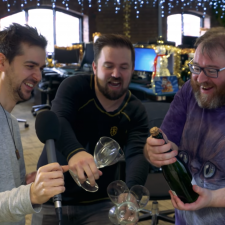 The annual Yogscast Jingle Jam event has come to an incredible close, after raising over a whopping $5 million.

The Jingle Jam began on December 1st 2017 in collaboration with Humble Bundle. The Humble Yogscast collection offered more than 60 games from over 50 developers and publishers, if people paid the recommended price of $35.

The Yogscast streamed on their main Twitch channel for a mininum of 12 hours a day throughout December, making up over 700 hours of live time throughout the event. The tradition began as the 'Christmas Livesteams' back in 2011, and has since become a staple of the company's activities.

The livestreams raised $500,000 just one hour after the event began on December 1st.

A member of the Yogscast even shaved her head for the cause after the total reached $5 million.

"The community has really taken it up - to the point where we have thousands of people watching the daytime 'office cam' as they wait for the action to start." Yogscast CEO Mark Turpin told Influencerupdate.biz at the start of December.

"We've also had amazing support from games developers and publishers who provide the games for the Bundle free of charge."