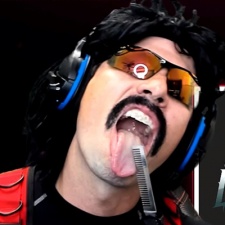 Hugely popular PlayerUnknowns’s Battlegrounds and H1Z1 streamer Guy ‘Dr Disrespect’ Beahm made his long awaited return to Twitch last night, and it was so popular it temporarily brought the site to its knees.

The site was only down for around ten minutes, and Beahm eventually went on to attract around 389k concurrent viewers. That falls just short of the 400k who watched Tyler1’s return to League of Legends following his ban last month – an event that also broke the streaming site.

Beahm’s new stream came after nearly two months away. Whereas other content makers’ misdeeds have included racism, promoting gambling to kids and monetising the dead, Beahm in December posted a short video in which he admitted to adultery.

“I just want to be completely transparent with you guys,” a visibly shaken and emotional Beahm said at the time. “I have a beautiful family, and a wife, and kid. I’ve been unfaithful and I’m probably going to be taking some time off to focus on my family. I apologise to you guys, my sponsors and Twitch. This is not who I am. It’s not what I represent.”

Last night’s stream was pretty much a return to business as usual, although the previous moniker given to his fans – the Slick Daddy Club – has now changed to The Champions Club. His personal issues were touched upon very briefly, with Beahm saying simply that “2018 needed to be a fresh start” and that he and his wife were going through “a rebuilding process”.

Beahm also revealed that he has dropped his human moderator team for the time being. Although not said, this could well be down to the fact that one of his previous mods leaked a few details about his infidelity in the days that followed his confession.

Viewer donations were also through the roof, with one contribution of $5k, and Beahm claimed at one point to have won an additional 12k subscribers during the sessions – that represents around $30k or so on its own.