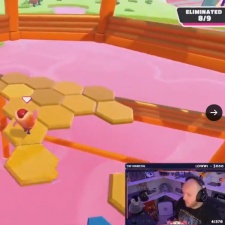 Twitch streamer Tim 'TimTheTatman' Betar has secured a win in Fall Guys. Why is that news?

After what started at jovial Twitter banter, Betar began a quest to secure a win in Mediatonic's manic new multiplayer game.

A stunning display of marketing from the Fall Guys Twitter account saw the internet quickly become invested in Betar's mission. What followed was an exchange of jokes between the game's brand account and Betar himself. One tweet named Betar as "statistically the worst-performing Fall Guy player in the world".

Last night, over 340,000 headed over to Betar's Twitch broadcast to watch him try and win one single game, the most viewers Betar has ever seen by a considerable margin. Betar tweeted his stats from the stream, which peaked at a huge 347,321 viewers. Check out his win here.

Year of the bean

Fall Guys is the smash of the summer - the title sold over 2 million copies on Steam alone in less than a week and has been generating huge numbers across Twitch.

Big numbers are not the game's only impressive feat - the team's social and community manager is utilising the success of the title to do some good. Currently, the account is leading a 'brand bidding war' allowing companies to buy their own custom in-game skin.