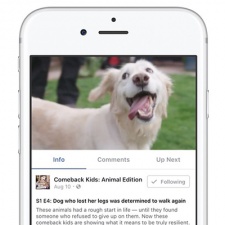 Google’s YouTube dominance could be about to face its stiffest competition yet with claims that Facebook wants to attract more creators to its Watch video platform.

CNBC reports that the ultimate motivation is to keep users on the site for longer, thus increasing the available moments against which it can sell ads.

Sources from three media agencies say that Facebook will allow creators to upload content for free, but will then take a cut from any ad revenues – a mirror of the YouTube model. Watch currently sees Facebook paying a handful of media and production companies for content, with some payments reportedly reaching as much as $500k per episode. Other content is uploaded for free on a partner basis.

When Watch first launched it required that videos be at least 90 seconds long, with ads appearing no sooner than 20 seconds in. These guidelines were revised in December to require content of at least 120 seconds in length, with ads permitted after 60 seconds. Its launch shows included ‘Comeback Kids’ and ‘Struggle Meals’.

This comes at a time when the hours users put into Facebook are declining, and also when YouTube is suffering its own problems as advertisers quit the platform amid concern about the suitability of some content.

Google last month launched a new Preferred partner program that for the first time is entirely moderated by humans. While this should appease worried advertisers, it also drastically limits the amount of content that can be hosted, this presenting a possible opportunity to rivals. Google has also upped the requirements for those hoping to monetise their content, which again could encourage creators to seek out alternative platforms.

In fact, CNBC reports that some advertisers are already concerned that Facebook’s proposed landgrab could land brands in exactly the same predicament they found themselves in on YouTube, with ads appearing alongside unsavoury content.